"It is hoped that this reconstruction is a good likeness and that, if someone who knew him in life had been presented with this restoration, they would hopefully have recognised the face", says Jenny Barber, an MSc student at the University of Dundee in Scotland.

She has scientifically rebuilt the face of the strong and stocky Viste Boy, who lived in the Vistehola cave near Stavanger, so that people can now look him right in the eye.

Ms Barber is studying forensic art, an unusual discipline embracing such elements as human anatomy and identification in order to recreate the appearance of an actual person.

This modelling method is primarily employed to assist police investigations, and is little known or used in Norway. But the country's most extensive reconstruction of a Stone Age skeleton has now been achieved.

Discovered in 1907, the Viste Boy represents the most complete Norwegian Stone Age skeleton and the third oldest human remains ever found in the Norway.

His dark-coloured skull and bones are currently on display in a glass case at the Archaeological Museum on the University of Stavanger (UiS).

Analyses show that the Viste Boy was approximately 15 when he died. He stood a bit less than 1.25 metres tall and probably lived in a group of 10-15 people.

From their studies of rubbish in and around Vistehola, the archaeologists determined that this clan ate fish – mostly cod – as well as oysters, mussels, cormorants, elk and wild pig.

They also thought that the teenager might have been sickly, which would explain his early death.

The oldest of Norway's known skeletons from the Stone Age belonged to a woman and was discovered at Søgne near Kristiansand in 1994. Her skull has been dated to 8 600 years ago.

She was the subject of Norway's first and hitherto only reconstruction of such ancient bones, which was exhibited at the University of Oslo's Museum of Art History in 1997.

This model was based on data from a series of skull X-rays, which allowed specialists at University College in London to build a three-dimensional recreation.

But reconstruction techniques are steadily improving, and the model of the Viste Boy reproduces his features differently than with the Søgne woman.

"The goal has been to create something as similar as possible to the original," explains Ms Barber. "That's what facial reconstruction is all about – identification and recognition of a unique person."

She has scanned the skull belonging to the long-dead youth with a laser surface scanner, which provided accurate data on his anatomy.

The cranium had suffered some damage, so the most complete side was duplicated. To support her work, Ms Barber also drew on a digital copy of the skull of another 15-year-old boy.

Nevertheless, the final anatomy corresponds to all intents and purposes with the original bone.

After her programming, Ms Barber could convert the digital construct into a plastic model and then shape muscle, skin and features in clay.

The clay bust formed the basis for a negative mould, with the finished product then cast in plastic resin and fibreglass. Eyes, ears and other details were finally painted or added.

Ms Barber's work revealed that the Viste Boy had scaphocephaly ("boat-head"), a congenital deformity which makes the skull long and narrow. She left the modelled head hairless to show this.

"The fact that the boy had scaphocephaly is a medical detail we hadn't observed before," says Mads Ravn, head of research at the Archaeological Museum.

He is very enthusiastic about the job Ms Barber has done, and points to similar work at Denmark's Moesgård Museum to reconstruct the Grauballe Man – a body recovered from a Danish bog.

He turned out to have a very protruding jaw and close-set eyes, which prompted the theory that he was an executed outcast or criminal, rather than a rich man sacrificed to the gods.

It was also clear that – like the Tollund Man, another "bog body" – resembled many contemporary Danes.

The work done by Ms Barber on the Viste Boy also demonstrates that the stocky lad was no weakling.

"This reconstruction indicates that he must have been muscular, quite simply a robust person," she observes. "So it's not certain that he was sickly, as people have thought.

"The bone analysis doesn't bear out such a diagnosis, and he has no other deformities that we know of other than the scaphocephaly."

Apart from the more scientific findings, such as the scaphocephaly and the good muscles, Mr Ravn thinks it is great to be able to look such a remote forefather in the eye.

"Just imagine, we can get an idea of how the oldest Norwegian man looked."

He is also very pleased at the opportunities this reconstruction opens up for the museum.

"Our challenge in older archaeology is to present the finds in a good way. Ms Barber's work has given us a fantastic chance to convey flesh and blood through a very ancient relic."

The project is part of the Scientific Archaeological Laboratory research programme at the UiS, which emphasises lab work in cooperation with the museum's Department of Education and Visitor Service.

Ms Barber herself stresses the educational aspect as an important motivation for her work.

"People are drawn to faces. The Viste Boy will probably attract attention in a future exhibition at the museum, bringing the story of Vistehola, the Viste Boy and the other people who lived there more alive for visitors."

She adds that facial reconstruction has been used for educational purposes by museums in many parts of the world, but is not used to any great extent at Norwegian institutions.

Face-to-face with an ancient human 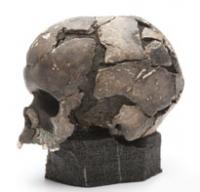 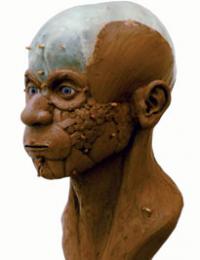