Scientists and engineers working at the frontier of nanotechnology face huge challenges. When the position of a single atom in a material may change the fundamental properties of that material, scientists need something in their toolbox to measure how that atom will behave.

A research team led by the University of Leeds, in collaboration with colleagues at the Sorbonne University in Paris, France, have shown for the first time that it is possible to develop a diagnostic technique loosely related to the idea of a tuning fork.

A tuning fork produces a fixed tone when energy is applied to it - in that case, when it is struck. But if the fork is somehow altered, it goes out of tune: the tone changes.

The technique being used by the research team involves firing a beam of electrons at a single atom in a solid. That energy stream causes it and the atoms that surround it to vibrate.

This creates a unique vibrational energy fingerprint, akin to the fixed tone from a tuning fork, which can be recorded by an electron microscope. But if a single atom impurity is present, another chemical element, for instance, the vibrational energy fingerprint of that impurity will change: the material will 'sound' different at this precise location.

The research opens up the possibility that scientists will be able to monitor materials for atomic impurities.

The findings, Single Atom Vibrational Spectroscopy in the Scanning Electron Microscope, are published today (March 5) in the journal Science.

Quentin Ramasse, Professor of Advanced Electron Microscopy at Leeds who led the project, said: "We now have direct evidence that a single "foreign" atom in a solid can change its vibrational property at the atomic scale.

"This has been predicted for decades, but there has not been any experimental technique to observe these vibrational changes directly. We have been able to show for the first time that you can record that defect signature with atomic precision."

The facility houses some of the most advanced facilities in the world for investigating the atomic structure of matter, and is operated under the auspices of an academic consortium led by the University of Leeds (also including the Universities of Oxford, York who were involved in this project, as well as Manchester, Glasgow and Liverpool).

The scientists located a single impurity atom of silicon in a large graphene crystal (a form of carbon only one atom thick) - and then focused the beam of their electron microscope directly on that atom.

Professor Ramasse said: "We are hitting it with an electron beam, which makes the silicon atom move around or vibrate, absorbing some of the energy of the incoming beam of electrons in the process - and we are measuring the amount of energy that is being absorbed."

The animation illustrates schematically how the silicon vibrates, and how that vibration begins to affect neighbouring atoms, and is inspired by extensive theoretical calculations by the team of Dr Guillaume Radtke at the Sorbonne University, who collaborated on this project.

(The animation can be downloaded from: https://drive.google.com/open?id=1DIct9Wg6lqd6PdO2stLKK8orq1Idcezq

"The vibrational response we observe is unique to how this particular silicon atom is located within the graphene lattice," added Dr Radtke. "We could predict how its presence would perturb the surrounding network of carbon atoms, but these experiments represent a real technical achievement because we are now able to measure with atomic precision such a subtle change."

The research and electron microscopy facilities were funded by the Engineering and Physical Science Research Council.

We are a top ten university for research and impact power in the UK, according to the 2014 Research Excellence Framework, and are in the top 100 of the QS World University Rankings 2020. Additionally, the University was awarded a Gold rating by the Government's Teaching Excellence Framework in 2017, recognising its 'consistently outstanding' teaching and learning provision.

Twenty-six of our academics have been awarded National Teaching Fellowships - more than any other institution in England, Northern Ireland and Wales - reflecting the excellence of our teaching.

Over a third of our academics are involved in applied research or as consultants to industry, and over the last ten years, the University of Leeds has produced more than 100 'spin-out' companies. http://www.leeds.ac.uk

'Tickling' an atom to investigate the behavior of materials 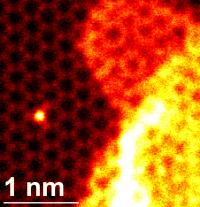 The Silicon Atom in a Graphene Crystal