The stronger the local magnetic field, the faster the switch takes place. But this is subject to a limit which has now almost been reached. "The number of bits has been growing rapidly for many years, but the write speed has hardly increased. There's a need for a new data storage technology", says TU/e researcher Sjors Schellekens. He is the lead author of a publication in Nature Communications, in which together with colleagues he presents a new technology.

The physicists, led by TU/e professor prof.dr. Bert Koopmans, use a special property of electrons, the spin – a kind of internal compass in the electron. Using ultra-fast laser pulses they generate a flow of electrons in a material which all have the same spin. The resulting 'spin current' changes the magnetic properties of the material (see the figure for an explanation of the technology).

"The change in the magnetization is of the order of 100 femtoseconds, which is a factor 1,000 faster than what is possible with today's technology", says Schellekens. As well as that, the researchers were able to describe the physical processes that are involved in detail. "There was discussion among physicists about whether the generated spin current is actually able to cause the change in magnetization. We now definitely show that this is really the case", says Schellekens.

In addition, the method is a step towards future optical computer chips, which TU/e is now working on. In December the university received a Dutch grant of almost 20 million euros to integrate photonics in computer systems. "Our technology allows optical data to be stored in the form of magnetic bits. That offers unprecedented opportunities if you want to use light as information carrier", says Schellekens.

Speeding up data storage by a thousand times with 'spin current' 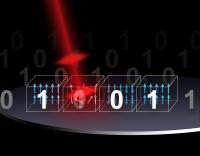