PHILADELPHIA –- People who identify as African-American may be as little as 1 percent West African or as much as 99 percent, just one finding of a large-scale, genome-wide study of African and African-American ancestry released today.

An international research team led by scientists from the University of Pennsylvania and Cornell University has collected and analyzed genotype data from 365 African-Americans, 203 people from 12 West African populations and 400 Europeans from 42 countries to provide a genome-wide perspective of African and African-American ancestry.

The data reveal genomic diversity among African and African-American populations far more complex than originally thought and reflect deep historical, cultural and linguistic impacts on gene flow among populations. The data also point to the ability of geneticists to reliably discern ancestry using such data. Scientists found, for example, that they could distinguish African and European ancestry at each region of the genome of self-identified-African Americans.

Sarah Tishkoff, a geneticist at Penn, and Carlos Bustamante, a computational biologist at Cornell, led the study to analyze 300,000 genetic markers from across the genome from West African, African-American and European-American populations to see whether they could reliably distinguish ancestry.

The team found that, while some West African populations are nearly indistinguishable, there are clear and discernible genetic differences among some groups, divided along linguistic and geographic lines.

This newly acquired genetic data revealed a number of important advances, including:

"Africa, which is the homeland of all modern humans, contains more than 2,000 ethnolinguistic groups and harbors great genetic and phenotypic diversity; however, little is known about fine-scale population structure at a genome-wide level," said Tishkoff, professor in the departments of genetics and biology at Penn. "We were able to distinguish among closely related West African populations and showed that genetically inferred ancestry correlates strongly with geography and language, reflecting historic migration events in Africa.

The study focused primarily on the genetic structure of West African populations, as previous genetic and historical studies suggested that the region was the source for most of the ancestry of present-day African-Americans. The results suggest that there are clear and discernible genetic differences among some of the West African populations, whereas others appear to be nearly indistinguishable, even when comparing more than 300,000 genetic markers. The researchers note that a larger sample size would likely reveal further substructure and diversity between these populations.

Analyzing patterns of population structure and individual ancestry in Africans and African-Americans illuminates the history of human populations and is critical for undertaking medical genomic studies on a global scale. Understanding ancestry not only provides insight into historical migration patterns, human origins and greater understanding of evolutionary forces, but also allows researchers to examine disease susceptibility and pharmacogenic response, and to develop personalized drugs and treatments, a frontier in public health.

There is also strong reason to believe that high-density genotype data from African and African-American populations may pinpoint more precisely the geographic origin of African ancestry in African-Americans, the researchers said. The study appears online in the Proceedings of the National Academy of Sciences.

The study was funded by the National Institutes of Health, National Science Foundation, David and Lucile Packard and Burroughs Wellcome Foundation. 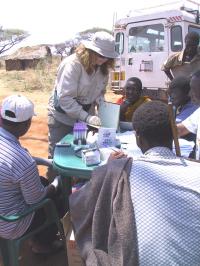