Auroras are lightshows that typically occur at high latitudes such as the Arctic and Antarctic; however, they expand equatorward under severe magnetic storms. Past observations of such unusual auroras can therefore allow us to determine the frequency and severity of magnetic storms. The more information that can be gathered about historic intense magnetic storms, the greater the opportunity to mitigate disruption of power grids in a future event.

Historical documents are becoming much more accessible for research as newly discovered records surface from private collections across the world. Researchers centered at Tokyo's National Institute of Japanese Literature (NIJL) and National Institute for Polar Research (NIPR) examined a detailed painting from a Japanese manuscript Seikai ("understanding comets") with associated commentary describes a red aurora occurring over Kyoto on 17 September 1770. Also investigated were detailed descriptions of the event from a newly discovered diary of the Higashi-Hakura family of Kyoto.

"The enthusiasm and dedication of amateur astronomers in the past provides us an exciting opportunity," Kiyomi Iwahashi of NIJL says. "The diary was written by a kokugakusha [scholar of ancient Japanese culture], and provides a sophisticated description of the red aurora, including a description of the position of the aurora relative to the Milky Way."

Using astrometric calculations of the elevations of the Milky Way as it would have been viewed from Kyoto on 17 September 1770, the researchers were able to calculate the geometry of the red aurora and check the results against the details from the Seikai painting and the diary. The success of the description of the aurora according to the historical documents allowed the researchers to estimate the strength of the magnetic storm that caused the September 1770 aurora.

"The magnetic storm on 17 September 1770 was comparable with or slightly larger than the September 1859 magnetic storm that occurred under the influence of the Carrington solar flare. The 1859 storm was the largest magnetic storm on record, in which technological effects were widely observed, "Ryuho Kataoka of NIPR says." It was lucky for us that the 1770 storm predated our reliance on electricity."

So how likely are such magnetic storms? " We are currently within a period of decreasing solar activity, which may spell the end for severe magnetic storms in the near future," Kataoka says. "However, we actually witnessed an extremely fast coronal mass ejection only several days ago [10 September 2017], which might be powerful enough to cause extreme storms. Fortunately, it just missed the Earth."

Regardless of the specific likelihood of another perfect magnetic storm, interdisciplinary historical and scientific collaborations are invaluable in providing important physical details that could help us to understand the greatest magnetic storms in history and prepare for any potential future event.

The Diary of the Higashi-Hakura Family 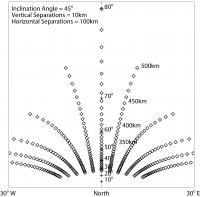 The Geometry of the Auroral Appearance