An invasive bird species is carrying, and potentially spreading, a high prevalence of avian malaria throughout its range in eastern Australia, a Griffith University PhD candidate has uncovered.

Nicholas Clark found that up to 40% of Indian Mynas in the South East Queensland region can carry malaria parasites. While they can't infect humans, the parasites pose a significant threat to native wildlife.

He said that because Mynas carry some malaria strains exotic to Australia, the spread of the Myna could put our native birds such as parrots, magpies and butcher birds at risk.

His discovery, which formed his thesis project while studying with the School of Environment, was published online on 19 October in the International Journal for Parasitology.

"Malaria parasites are common in Australian birds but through the use of genetic techniques I have discovered they are more diverse than originally thought," the former Gold Coast student, who now works for the Department of Agriculture and Fisheries said.

Nicholas said that some of the malaria parasites found in Australia were probably introduced from other countries and are now being spread by the Myna, which was brought to Australia in the 1800s to control insect pests on crops. But today they are considered an aggressive pest that has the potential to cause significant negative impacts on biodiversity.

"These malaria parasites seem to have little effect on the Mynas but could be harmful to native birds as they come in contact with each other," Nicholas said.

"Mynas are known to impact native birds by driving them away from nesting sites, but my work suggests they are also exposing our natives to new diseases.

"I believe we as a society, have under estimated the threat they can cause."

Nicholas said avian malaria parasites cannot be spread to people. However the next step in this research will be to investigate what other diseases invasive birds like the Indian Mynas are potentially carrying and determine if these are a risk to people.

The Queensland Government Department of Agriculture and Fisheries and The City of Gold Coast discourage Indian Mynas by planting vegetation that is not attractive to this species and coordinate trapping programs. 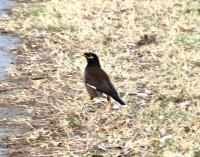