Johannesburg – A team of South African and international scientists from the Evolutionary Studies Institute (ESI) at the University of the Witwatersrand (Wits) and 15 other global institutions, are publishing six papers and an introduction by Prof. Lee Berger, the lead author and project leader, in the prestigious journal Science tomorrow, Friday, 12 April 2013.

The papers report on some of the most complete early human ancestral remains ever discovered. The 2-million-year-old fossils belong to the species Australopithecus sediba (Au. sediba) and provide what Berger, from the Wits Evolutionary Studies Institute, describes as "unprecedented insight into the anatomy and phylogenetic position of an early human ancestor".

The six papers represent the culmination of more than four years of research into the anatomy of Au. sediba based on the holotype and paratype skeletons commonly referred to as MH1 and MH2, as well as the adult isolated tibia referred to as MH4. The fossil remains were discovered at the site of Malapa in August of 2008, and the species was named in 2010 by Berger and his colleagues. The articles presented in Science complete the initial examination of the prepared material attributed to these three individuals.

In essence, the six studies describe how the 2-million-year-old Au. sediba walked, chewed and moved.

Berger summarises that Au. sediba provides us with the most comprehensive examination of the anatomy of a definitive single species of early hominin. "This examination of a large number of associated, often complete and undistorted elements, gives us a glimpse of a hominin species that appears to be mosaic in its anatomy and that presents a suite of functional complexes that are both different from that predicted for other australopiths, as well as that for early Homo.

Such clear insight into the anatomy of an early hominin species will clearly have implications for interpreting the evolutionary processes that affected the mode and tempo of hominin evolution and the interpretation of the anatomy of less well preserved species," says Berger.

"Aside from the 26 authors from 16 institutions involved in these publications, the team focusing its research efforts on Au. sediba and Malapa now numbers more than 100 researchers from around the world and represents one of the largest dedicated archaeological or palaeontological research programmes," says Prof. Loyiso Nongxa, Vice-Chancellor and Principal of the University of the Witwatersrand. Berger adds that the work undertaken to date, although only five years in the making (since the discovery of the site in mid-2008), represents some of the most extensive focused literature on a single early hominin species yet created.

Included in the recent discoveries from the site are a new species of fox, named by the team as Vulpes skinneri just three months ago, and the discovery of more than 300 early human ancestor remains, including parts of skeletons still encased in rock.

Berger concludes: "Discoveries such as Australopithecus sediba and the Malapa site demonstrate the need for further African based exploration in the rich fossil fields of southern Africa, and additionally demonstrate the tremendous promise of the palaeosciences on the continent."

Prof. Lee Berger, researcher in the Wits Evolutionary Studies Institute (ESI) at the University of the Witwatersrand, project leader and lead author of the introduction entitled Mosaic Anatomy of Australopethicus Sediba, summarises that Au. sediba provides the most comprehensive examination of the anatomy of a definitive single species of early hominin.

"This examination of a large number of associated, often complete and undistorted elements, gives us a glimpse of a hominin species that appears to be mosaic in its anatomy and that presents a suite of functional complexes that are both different from that predicted for other australopiths, as well as that for early Homo," says Berger.

"Such clear insight into the anatomy of an early hominin species will clearly have implications for interpreting the evolutionary processes that affected the mode and tempo of hominin evolution and the interpretation of the anatomy of less well preserved species."

The first paper, by lead author Prof. Joel Irish from the Research Centre for Evolutionary Anthropology and Palaeoecology at Liverpool John Moores University in the United Kingdom and his co-authors, examines non-metric dental traits in Au. sediba.

The latter, in turn, shares a number of derived states with a clade comprising four fossil samples of the genus Homo. This surprising result has significant implications for our present understanding of hominin phylogeny through the terminal Pliocene, and alludes to the possibility that Au. sediba, and perhaps Au. africanus are not descendant from the Au. afarensis lineage.

Irish noted that even though the results of this study were surprising and were bound to be viewed as controversial given the long held hypotheses relating to the origins of the genus Homo he would have come to the same conclusion.

"The extreme age and rarity of these fossils naturally draws enhanced interest in and scrutiny of any new findings. Based on the evidence, I would have come up with the same conclusions whether the samples were three million or 30 years old. If I had found that Au. sediba was totally distinct from all other hominins, I would have been just has happy to report that," says Irish.

Prof. Darryl de Ruiter from the Department of Anthropology, Texas A&M and the Evolutionary Studies Institute at the University of the Witwatersrand, and his co-authors examine new mandibular material attributable to MH2, including the previously unknown mandibular incisors and premolars of Au. sediba held in a spectacular new mandibular specimen associated with the female paratype specimen.

The study concludes, as is seen elsewhere in the cranium and skeleton, these mandibular remains share similarities with other australopiths, but can be differentiated from the southern African ape-man Au. africanus in both size and shape, as well as in their unique ontogenetic growth trajectory.

"These results add further support to the claim that Au. sediba is taxonomically distinct from the temporally – and geographically – close species Au. africanus. Where the Au. sediba mandibles differ from those of Au. africanus, they appear most similar to representatives of early Homo," says De Ruiter.

THE UPPER LIMB OF AUSTRALOPETHICUS SEDIBA

In the third paper by Prof. Steven Churchill from the Department of Evolutionary Anthropology at Duke University and the Evolutionary Studies Institute at University of the Witwatersrand, he and his co-authors describe new, remarkably well preserved upper limb elements of Au. sediba.

The paper announces the first complete (or nearly complete) and undistorted humerus, radius, ulna, scapula, clavicle and manubrium (a frontal chest bone) yet described from the early hominin record, all associated with one individual.

The authors note that with the exception of the hand skeleton (which exhibits a suite of derived features that may signal enhanced manipulative capabilities relative to earlier australopiths), the upper limbs of the Malapa hominins are largely primitive in their morphology. Au. sediba thus shares with other australopiths an upper limb that was well-suited for arboreal or other forms of climbing and possibly suspension, though perhaps more so than has been previously suggested for any other member of this genus.

Churchill adds that "it is possible that the climbing features in the skeleton of Australopithecus sediba and other australopiths are functionally unimportant primitive traits retained from a more arboreal ancestor. Even so, it is curious that these features persist unchanged for several million years, only to abruptly disappear with the emergence of the genus Homo."

MOSAIC MORPHOLOGY IN THE THORAX OF AUSTRALOPETHICUS SEDIBA

Remains of the rib cage of Au. sediba are described in the fourth paper by Dr Peter Schmid and his co-authors at the Evolutionary Studies Institute at the University of the Witwatersrand and the University of Zurich.

Their findings reveal a mediolaterally-narrow upper thorax like that of the large-bodied apes, and unlike the broad, cylindrical chest seen in humans. In conjunction with the largely complete remains of the shoulder girdle, Schmid notes that "the morphological picture that emerges is one of a conical thorax with a high shoulder joint that produces in Au. sediba an ape-like "shrugged" shoulder appearance, and thus a configuration that is perhaps uniquely australopith, and that would not have been conducive to human-like swinging of the arms during bipedal striding and running".

The research however shows that the less well-preserved elements of the lower rib cage suggest a degree of human-like, mediolateral narrowing to the lower thorax. This indicates a surprising and rather unsuspected mosaic anatomy in the chest that is not like that observed in H. erectus or H. sapiens.

THE VERTEBRAL COLUMN OF AUSTRALOPETHICUS SEDIBA

Dr Scott Williams from the Center for the Study of Human Origins, Department of Anthropology, New York University and co-authors on the fifth paper describing the vertebral column of Au. sediba is the first paper to analyse elements of the cervical, thoracic, lumbar, and sacral regions of the vertebral column in Au. sediba.

Among the material described is a remarkably articulated lumbar vertebral region that shows a human-like curvature of the lower back. Williams notes that "the adult female is the first early hominin skeleton that preserves an intact terminal thoracic region and this provides critical information on the transition in inter-vertebral joints, and, by inference, mobility of the lower back".

The study also demonstrates that Au. sediba had the same number of lumbar vertebrae as modern humans, but possessed a functionally longer and more flexible lower back. In addition, morphological indicators of strong lumbar curvature suggest that Au. sediba was derived in this regard relative to Au. africanus and more similar to the Nariokotome Homo erectus skeleton.

THE LOWER LIMB AND THE MECHANICS OF WALKING IN AUSTRALOPETHICUS SEDIBA

The sixth paper by Dr Jeremy DeSilva and his co-authors at Boston University and the Evolutionary Studies Institute at the University of the Witwatersrand describes the lower limb anatomy of Au. sediba is described and a specific biomechanical hypothesis is proposed as to how this species walked.

"The female Australopithecus sediba preserves a heel, ankle, knee, hip and lower back- all of the ingredients necessary to reconstruct how she walked with remarkable precision. Even the famous Lucy skeleton only preserves two of these five (ankle and hip)", says DeSilva.

In isolation, the anatomies of the heel, mid-foot, knee, hip, and back are unique and curious, but in combination, they are internally consistent for a biped walking with a hyper-pronating gait.

"The implications of this study are that multiple forms of bi-pedalism were once practiced by our early hominin ancestors," adds Berger. 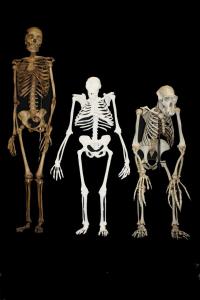