Most living mammals are active at night (or nocturnal), and many other mammal species are active during twilight conditions. It has long been thought that the transition to nocturnality occurred at about the same time as mammals evolved, around 200 million years ago. This thinking was based on on features such as the large brains of mammals (good for processing information from senses like hearing, touch, and smell) and the details of light-sensitive chemicals in the eyes of mammals.

It turns out that nocturnal activity might have a much older origin among ancient mammal relatives, called synapsids.

"Synapsids are most common in the fossil record between about 315 million years ago and 200 million years ago. The conventional wisdom has always been that they were active during the day (or diurnal), but we never had hard evidence to say that this was definitely the case," says Kenneth Angielczyk, a curator at The Field Museum. He's the lead author of a paper appearing September 3 in the early edition of Proceedings of the Royal Society B entitled "Nocturnality in Synapsids Predates the Origin of Mammals by 100 Million Years."

The new insights come from an analysis of tiny bones, called scleral ossicles, that are found in the eyes of many backboned animals, including birds and lizards. Living mammals lack scleral ossicles, but they were present in many of their ancient synapsid relatives. "The scleral ossicles tell us about the size and shape of different parts of the eyeball," said Lars Schmitz, a professor of biology at Claremont McKenna, Pitzer, and Scripps Colleges, located near Los Angeles. "In turn, this information allows us to make predictions about the light sensitivity of the eye, which usually reflects the time of day an animal is active.

Because scleral ossicles are very delicate, they usually aren't preserved in synapsid fossils. However, by scouring museum collections in the United States and South Africa, and with help from other paleontologists, Angielczyk and Schmitz were able to collect data on scleral ossicles from 24 species that represent most major groups of synapsids. The synapsid data were then compared to a large dataset of similar measurements for living lizards and birds that have known daily activity patterns, using a statistical technique developed by Schmitz.

The technique revealed that the eyes of ancient synapsid species likely spanned a wide range of light sensitivities, with some consistent with activity under bright conditions during the day and others having eyes best suited to low-light conditions at night. Of particular interest was the fact that the oldest synapsids in the dataset, including the famous sail-backed carnivore Dimetrodon, were found to have eye dimensions consistent with activity at night. Based on the ages of the rocks in which these fossils are found, the results indicate that nocturnality had evolved in at least some synapsids by about 300 million years ago, or 100 million years earlier than the age of the first mammals. Indeed, Angielczyk and Schmitz's results raise the possibility that the common ancestor of all synapsids was active at night.

"The idea of a nocturnal Dimetrodon was very surprising," said Angielczyk, "but it shows how little we really known about the daily lives of some of our oldest relatives." "This is the first time we can make informed predictions about the activity patterns of synapsids," added Schmitz. "As we discover more fossils, we can continue to test these predictions and start to address questions such as how many times nocturnality evolved in synapsids and whether the synapsids most closely related to mammals were also nocturnal."

The results should be useful to researchers studying the visual systems and behavior of living mammals, and they also will necessitate the rethinking of some long-held ideas, such as mammals becoming nocturnal to avoid competition with dinosaurs.

FAQ: Nocturnality in Synapsids Predates the Origin of Mammals by Over 100 Million Years

This fact sheet was developed by co-authors of "Nocturnality in Synapsids Predates the Origin of Mammals by Over 100 Million Years," being published the week of September 3 in the early edition of Proceedings of the Royal Society B.

3) The common ancestor of all synapsids (including living mammals) may have been nocturnal (active at night).

4) Most plant-eating synapsids that were included in the study are predicted to have been active during the day.

5) Nocturnality may have evolved multiple times in synapsids.

Our Paper Does not Say

Potential Commentators (not affiliated with this research) 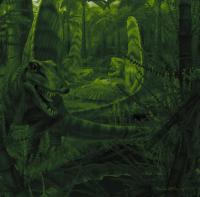