PROVIDENCE, RI – Almost a quarter of a million individuals addicted to heroin are incarcerated in the United States each year. However, many prison systems across the country still do not offer medical treatment for heroin and opiate addiction, despite the demonstrated social, medical and economic benefits of opiate replacement therapy (ORT).

According to new research from The Miriam Hospital, Brown University and their affiliated Center for Prisoner Health and Human Rights, just half of all federal and state prison systems offer ORT with the medications methadone and buprenorphine, and only in very limited circumstances. Similarly, only twenty-three states provide referrals for some inmates to treatment upon release from prison. These policies are counter to guidelines issued by both the World Health Organization (WHO) and the Centers for Disease Control and Prevention, which say prisoners should be offered ORT for treatment of opiate dependence.

The study's findings are published online by Drug and Alcohol Dependence.

"Pharmacological treatment of opiate dependence is a proven intervention, is cost-effective and reduces drug-related disease and reincarceration rates, yet it remains underutilized in U.S. prison systems," said Amy Nunn, ScD, the study's lead author and an assistant professor of medicine (research) at The Warren Alpert Medical School of Brown University. "Improving correctional policies for addiction treatment could dramatically improve prisoner and community health as well as reduce both taxpayer burden and reincarceration rates."

"Opiate addiction, like all forms of addiction, causes long-term changes to the structure and functioning of the brain, which is why it is classified as a disease. Addiction requires treatment just as other chronic diseases, like diabetes and cancer, do. Unfortunately, there is a large gap between the number of prisoners who require addiction treatment and those who actually receive it," added senior author Josiah Rich, MD, MPH, co-director of the Center for Prisoner Health and Human Rights at The Miriam Hospital and Alpert Medical School.

The U.S. has the world's highest incarceration rate, with approximately 10 million individuals incarcerated each year. More than half of inmates have a history of substance use and more than 200,000 people with heroin addiction are incarcerated annually. Inmates face disproportionately higher burdens of mental illness, substance use and infectious diseases, including HIV/AIDS. Meanwhile, their transition back to their communities is often associated with increased sexual health and drug-related risks, and more than half will relapse within one month of their release.

For the past four decades, methadone has been the treatment of choice for opiate dependence. It prevents withdrawal symptoms and drug cravings, blocks the euphoric effects of other opiates, and reduces the risk of relapse, infectious disease transmission and overdose death. The drug buprenorphine is a newer treatment for opiate replacement that has less likelihood of overdose and is associated with less social stigma. Like methadone, it prevents withdrawal symptoms when an individual stops taking opioid drugs by producing similar effects. Both methadone and buprenorphine are included in WHO's "Essential Medicines" list of drugs that should be made available at all times by health systems to patients.

The Miriam/Brown research team surveyed the medical directors at the 50 state departments of corrections, along with the Federal Bureau of Prisons and the District of Columbia prison, about their facilities' ORT prescribing policies and referral programs for inmates leaving prison. They received a total of 51 of 52 responses.

When asked why these treatments are not available in their prison system, the majority of facilities indicated they prefer drug-free detoxification over ORT. A number of prison systems also cited security concerns about providing methadone and buprenorphine to inmates. Interestingly, 27 percent of medical directors said they did not know how beneficial methadone is for treating inmates with opiate addiction, while half were unaware of the benefits of buprenorphine.

A major barrier to providing ORT after incarceration appears to be the lack of partnerships with community ORT providers. Many providers also cited their focus on inmate health during incarceration, rather than upon release, as another reason for not linking inmates to ORT after they've been released.

"In spite of overwhelming scientific evidence demonstrating that pharmacological treatment for addiction has greater health and social benefits than abstinence-only policies, many prison directors are philosophically opposed to treating substance use. Most prisons also do not provide referrals for substance use treatment for prisoners upon release," said Nunn. "These trends contribute to high reincarceration rates and have detrimental impacts on community health. Our interviews with prison medical directors suggest that changing these policies may require an enormous cultural shift within correctional systems."

The study was supported by grants from the National Institute of Health's National Institute on Drug Abuse (NIDA/NIH) and Center for AIDS Research (CFAR); and the Tufts Nutrition Collaborative. In addition to Nunn and Rich, co-authors include Nickolas Zeller and Ank Nijhawan from both The Miriam Hospital and Alpert Medical School; Samuel Dickman from Brown University; and Catherine Trimbur from the University of Rochester School of Medicine and Dentistry.

The Miriam Hospital, established in 1926 in Providence, RI, is a private, not-for-profit hospital affiliated with The Warren Alpert Medical School of Brown University and a founding member of the Lifespan health system. For more information about The Miriam Hospital, please visit www.miriamhospital.org 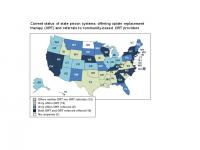