The longest animal in the world, the bootlace worm, which can be up to 55 metres long, produces neurotoxins that can kill both crabs and cockroaches. This has been shown in a new study conducted by researchers at Uppsala University, Linnaeus University and the Swedish Species Information Centre at the Swedish University of Agricultural Sciences. The study was published in Scientific Reports, 22 March. The toxins could be used for example in agricultural insecticides.

"This peptide toxin is the most poisonous substance to have been found in Sweden's animal kingdom and the fact that it may be possible to use it makes the discovery even more exciting. We already know that peptide toxins are found in, for example, cone shells that live in tropical waters. These ribbon worms live in colder waters, for example, the coastlines of Great Britain and Norway and the west coast of Sweden," says Ulf Göransson, Professor of Pharmacognosy, Department of Medicinal Chemistry, Uppsala University, who has led the study.

The research team, made up of researchers from three Swedish universities and colleagues from Belgium and Australia, has studied a group of marine worms to which the ribbon worm "bootlace worm", Lineus longissimus, belongs. Up to now, few studies have been done on the chemistry of ribbon worms but in this study, the research team has found protein-based neurotoxins in the species bootlace worm. When the worm is irritated, it releases large amounts of a thick mucus that is poisonous for crustaceans, for example. The researchers extracted the most prevalent toxin from the mucus and discovered that it could paralyse and kill crustaceans and cockroaches.

Toxins often affect the ionic channels, that is, proteins that control the transport of different ions in and out of cells. The researchers showed that the isolated toxin impedes the inactivation of the sodium channels in three species of invertebrate animals: the German cockroach, fruit fly and Varroa mite. That causes continual electric signalling in nerves and muscles, which gives rise to paralysis.

Laboratory tests were conducted to investigate how the toxin affects the sodium channels of mammals. There, the reaction was not nearly as strong. Therefore, the researchers believe the toxin is probably not poisonous for humans or other mammals.

Today, similar neurotoxins that have been extracted from snakes, spiders and cone shells are used, for example, as pharmaceuticals, pharmacological tools, in biotechnology and as agricultural insecticides. The researchers believe that the toxins from the bootlace worm can also be used to develop new insecticides.

"The peptide toxin has a very powerful effect on crustaceans and cockroaches, which is why it could serve as a very effective insecticide.

"From a research point of view, it's exciting to have discovered a new toxin in our own fauna, in a group of animals that has basically never been explored. Moreover, the whole chain of research can be attributed to our team's effort, from discovering the substance in the bootlace worm to describing the structure of the toxin and studying its effect," says Ulf Göransson. 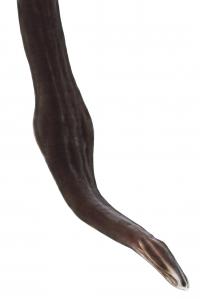 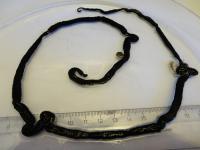