WASHINGTON, Aug. 17, 2009 — Scientists have copied the natural glue secreted by a tiny sea creature called the sandcastle worm in an effort to develop a long-sought medical adhesive needed to repair bones shattered in battlefield injuries, car crashes and other accidents. They reported on the adhesive here today at the 238th National Meeting of the American Chemical Society (ACS).

"This synthetic glue is based on complex coacervates, an ideal but so far unexploited platform for making injectable adhesives," says Russell Stewart, Ph.D. "The idea of using natural adhesives in medicine is an old one dating back to the first investigations of mussel adhesives in the 1980s. Yet almost 30 years later there are no adhesives based on natural adhesives used in the clinic."

The traditional method of repairing shattered bones is to use mechanical connectors like nails, pins and metal screws for support until they can bear weight. But achieving and maintaining alignment of small bone fragments using screws and wires is challenging, Stewart said. For precise reconstruction of small bones, health officials have acknowledged that a biocompatible, biodegradable adhesive could be valuable because it would reduce metal hardware in the body while maintaining proper alignment of fractures.

Stewart and colleagues duplicated the glue that sandcastle worms (Phragmatopoma californica) use while building their homes in intertidal surf by sticking together bits of sand and broken sea shells. The inch-long marine worm had to overcome several adhesive challenges in order to glue together its underwater house, and its ingenuity has served as a recipe for Stewart's research team in developing the synthetic adhesive.

Stewart's challenge was to devise a water-based adhesive that remained insoluble in wet environments and was able to bond to wet objects. The team also concentrated on key details of the natural adhesive solidification process — a poorly timed hardening of the glue would make it useless, Stewart said. They learned the natural glue sets in response to changes in pH, a mechanism that was copied into the synthetic glue.

The new glue, says Stewart, a bioengineer at the University of Utah in Salt Lake City, has passed toxicity studies in cell culture. It is at least as strong as Super Glue and is twice as strong as the natural adhesive it mimics, he notes.

"We recognized that the mechanism used by the sandcastle worm is really a perfect vehicle for producing an underwater adhesive," Stewart said. "This glue, just like the worm's glue, is a fluid material that, although it doesn't mix with water, is water soluble."

Stewart has begun pilot studies focused on delivering bioactive molecules in the adhesive that could allow it to fix bone fragments and deliver medicines to the fracture site, such as antibiotics, pain relievers or compounds that might accelerate healing.

"We are very optimistic about this synthetic glue," he said. "Biocompatibility is one of the major challenges of creating an adhesive like this. Anytime you put something synthetic into the body, there's a chance the body will respond to it and damage the surrounding tissue. That's something we will monitor, but we've seen no indication right now that it will be a problem."

Secrets of the sandcastle worm could yield a powerful medical adhesive 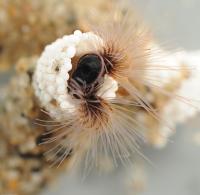