New research shows that the fearsome teeth of the saber-toothed cat Smilodon fatalis fully emerged at a later age than those of modern big cats, but grew at a rate about double that of their living relatives. The findings, published today in the journal PLOS ONE and based on a new technique that combines isotopic analysis and x-ray imaging, for the first time provide specific ages for developmental events in Smilodon, notably in their teeth. The study estimates that the eruption rate of S. fatalis's permanent upper canines was 6 millimeters per month--double the growth rate of an African lion's teeth. But the extinct cat's dagger-like canines weren't fully developed until about three years of age.

"For predators such as big cats, an important determinant of an individual's full hunting ability is the time required to grow their weapons--their teeth," said Z. Jack Tseng, a National Science Foundation and Frick Postdoctoral Fellow in the American Museum of Natural History's Division of Paleontology and a coauthor on the new paper. "This is especially crucial for understanding sabertoothed predators such as Smilodon."

S. fatalis lived in North and South America until going extinct about 10,000 years ago. About the size of a modern tiger or lion but more solidly built, the cats are famous for their protruding canines, which could grow to be 18 centimeters (about 7 inches) long. Although well-preserved fossils of S. fatalis are available to researchers, very little is known about the absolute ages at which the animals reached key developmental stages.

"Timing of development is critical for many aspects of vertebrate ecology and evolution," said Robert Feranec, curator of Pleistocene vertebrate paleontology at the New York State Museum and the corresponding author on the paper. "Changes in the timing of life-history events can have major effects on an organism's adult features and final appearance. For extinct species, we can usually only determine the relative sequence of developmental events. This technique will permit the determination of absolute developmental age not only for Smilodon, but other extinct species."

By using the eruption rate to calibrate a previously published tooth-replacement sequence for the saber-toothed cat, the researchers calculated the timing of various growth events in absolute units (months), as opposed to the relative timing used in all previous research on this animal.

S. fatalis, like many other mammals, had two sets of teeth in its lifetime, and the first stopped erupting when the cub was about one-and-a-half years old. Toward the end of the eruption of the baby teeth, the permanent teeth started to erupt, with about an 11-month period where both sets of saber teeth could be seen inside of a cub's mouth.

As in human babies, the cubs of S. fatalis had loosely fitted pieces of bones in their skulls that fuse over time. The two parietal bones at the back of the cats' skulls were where their main jaw muscles attached, making the bones' fusion a necessity for supporting forces that enable them to eat larger chunks of meat or hunt larger prey. In S. fatalis, parietal bone fusion happened when the cubs were between one and one-and-a-half years old, about eight months earlier than is seen in modern lions. The timing coincides with the full eruption of the baby canines.

"This means that the jaw muscles of these cubs were anatomically ready to be used in hunting early on with their loaner set of sabers," Tseng said.

After about 20 months, the cats shed their baby canines, and the permanent ones continued to grow until the animals were between three to three-and-a-half years old, later than seen in modern large cats like tigers, leopards, and lions, but not as late as might be expected, the researchers said.

"Despite having canine crown heights that were more than twice those of the lion, Smilodon didn't require twice as much time to develop its canines," said Aleksander Wysocki, a graduate student at Clemson University and lead author on the paper.

Based on the results, young cats--less than 4-7 months old--are extremely rare in the vast collections from the La Brea Tar Pits.

"Considering the abundance of predators at Rancho La Brea, younger cubs would have been at risk of being preyed upon themselves if they attempted to feed on the animals trapped within the tar pits," Wysocki said. "The cubs probably remained hidden or at den sites while the adults pursued prey trapped in the tar pits and never made it back out."

The researchers say that the technique they demonstrate in the paper could be applied to a variety of extinct species to better understand the manner and rate by which different animals grew, for example, by looking at the tusks of extinct elephants or marine mammals. 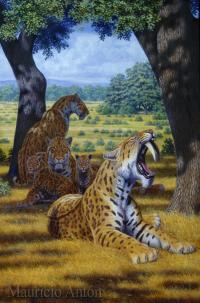 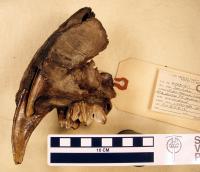