Using old tree rings and archival documents, historians and climate scientists have detailed an extreme cold period in Scotland in the 1690s that caused immense suffering. It decimated agriculture, killed as much as 15 percent of the population and sparked a fatal attempt to establish a Scottish colony in southern Panama. The researchers say the episode--shown in their study to have been during the coldest decade of the past 750 years--was probably caused by faraway volcanic eruptions. But it was not just bad weather that brought disaster. Among other things, Scotland was politically isolated from England, its bigger, more prosperous neighbor that might have otherwise helped. Propelled in part by the catastrophe, the two nations merged in 1707 to become part of what is now the United Kingdom. Such a famine-related tragedy was never repeated, despite later climate swings.

With Brexit now threatening to isolate the UK from the European Union, the researchers think politicians should take this as a cautionary tale. "By joining England, Scotland became more resilient," said lead author Rosanne D'Arrigo, a tree-ring scientist at Columbia University's Lamont-Doherty Earth Observatory. "The bigger message for today is arguably that as the climate changes, nations will be stronger if they stick together and not try to go it alone." The study appears in the early online edition of the Journal of Volcanology and Geothermal Research.

The "Scottish Ills" have long been noted in history books. In some years, snow from the winter persisted on the ground well into summer, and frosts struck every summer night for weeks. The planting season was cut short, and crops were struck down before they could be harvested. Livestock had nothing to eat. The study quotes Mary Caithness, Countess of Breadalbane, describing "cold misty weather such as the oldest person alive hath not seen." Other regions including France, England and the Netherlands also suffered unusually cold weather, but generally with less drastic results. In Scandinavia, however, tens of thousands died. It was "likely the worst era of crop failure, food shortage and mortality ever documented in Scottish history," the researchers write.

Based on the width and density of tree rings the researchers collected, they showed that 1695-1704 was Scotland's coldest decade in 750 years. This, on top of the fact that much of the northern hemisphere was already in the grip of the so-called Little Ice Age, when cold temperatures were the norm for centuries, until the 1800s. "Before this, we knew it was cold. Now we have an understanding of exactly how cold," said coauthor Rob Wilson of Scotland's University of St. Andrews, and an adjunct researcher at Lamont-Doherty. "The whole 17th century must have been a horrible time to live in Scotland, but this was the worst part."

The researchers say that the Ills coincided closely with multiple large volcanic eruptions. Previous researchers have identified particles in ice cores that traveled long distances from eruptions that probably took place somewhere in the tropics in 1693 and 1695. And Iceland's Mount Hekla darkened the skies for seven months in 1693. Scientists already know that large-scale volcanism throws sulfate particles into the atmosphere; these deflect sunlight and can lower temperatures far from the eruption itself for years. Thus, the researchers believe the eruptions would explain the chilly weather that hit Scotland and other northern hemisphere nations all at the same time. (Unsurprisingly, the tree rings also show that the warmest century of the record was 1911-2010, almost certainly due to human greenhouse-gas emissions.)

The findings are an outgrowth of the Scottish Pine Project, in which Wilson and his colleagues have been gathering tree-ring samples for the past 10 years in northern Scotland. In the desolate Highlands region of Cairngorms, they have drilled out cores from living trees going back to the 1400s. To extend the record back further, they have snorkeled along the nearshore bottoms of icy lochs, searching for long-dead trees that have fallen in and been preserved over the centuries in cold, oxygen-poor mud. Once they find specimens, they winch them out by hand and take out cross sections with chain saws. The team has also studied buildings whose timbers went back to the 1100s, though these were not included in the climate reconstruction. Their initial chronology was published in 2017. In the course of their work, the team has found trees in the lochs as old as 8,000 years. They are still collecting samples and working to construct a continuous climate record predating the Middle Ages.

In the new study, the researchers say that climate was not the only factor in the Scottish Ills. "The connection seems simple--volcanic cooling triggered famine--but the drivers toward famine are far more complex," they write. They cite Scotland's economic circumstances and political isolation from England as major factors. England had more good farmland and, at the time, better agricultural technology and organization for delivering relief to the poor. While also hit with cool weather, England did not suffer a famine, and probably would have come to the aid of Scotland had the nations been united. Scotland also unwisely encouraged the export of crops at a time when they were needed at home.

At the height of the Ills, the Scots developed an intricate venture to send colonists to the Darien region of Panama. Driven in part by the desperation of the famine, the idea caught on as a national mania, and people of all social and economic classes invested much of their assets--in all, as much as half the nation's entire liquid capital. Starting in 1698, a total of 2,500 colonists began sailing to this malarial jungle coast. They were quickly cut down by disease, malnutrition (Scotland could ill afford to resupply the colony) and conflicts with Spanish forces, which already controlled much of South and Central America. The colony was abandoned after just 16 months; only a few hundred colonists survived; and Scotland was financially ruined. The inhospitable Darien region remains barely inhabited even today.

"At the time, the Scots saw the colony as a kind of Exodus, where they would start over somewhere new," said D'Arrigo. "In the end, they couldn't escape."

Repeated proposals to unite England and Scotland had come up during the 1600s, but the Scots had resisted. As the famine came to a close, they finally gave in; apparently, many of the gentry making the decision figured that hitching themselves to a greater power would buffer them from further misfortunes. The Acts of Union, passed by the parliaments of Scotland and England, took effect in 1707. Scotland suffered other climate extremes in succeeding centuries, but never again collapsed in this way.

In 2014, more than 300 years after the union, the Scots took a referendum on whether to once again become an independent state; 55 percent voted to stay with the UK. Then came the 2016 UK-wide referendum that set Brexit in motion--deeply unpopular in Scotland, where 62 percent voted to remain in the EU. In last week's UK parliamentary elections, pro-Brexit forces won overall, but lost resoundingly in Scotland. Many Scots now seem to be reconsidering independence--not because they want to stand alone again, but because independence might allow them to rejoin the larger community of the EU, and leave the isolationist English to fend for themselves. Calls for another independence referendum are already circulating.

"Scotland became more resilient when it became part of a union," said Wilson. "It's a cautionary tale from history."

The study's other authors are historians Patrick Klinger of the University of Kansas and Timothy Newfield of Georgetown University, and climate scientist Milos Rydval of the Czech University of Life Sciences.

The paper is 'Complexity in crisis: The volcanic cold pulse of the 1690s and the consequences of Scotland's failure to cope.' It is at https://www.sciencedirect.com/science/article/pii/S0377027319303087?via%3Dihub or is available from the authors.

Journal of Volcanology and Geothermal Research

In ancient Scottish tree rings, a cautionary tale on climate, politics and survival 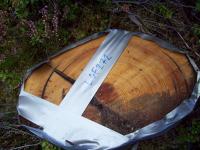 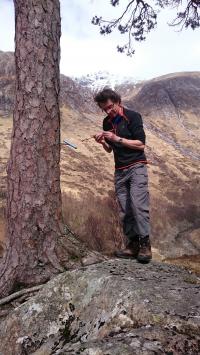