If a volcano explodes in the remote reaches of Alaska, will anyone hear it? Seismologists working in the state say yes--after using a refined set of methods that allows them to detect and locate the airwaves generated by a volcanic explosion on distant seismic networks.

In a study published online in the Bulletin of the Seismological Society of America, David Fee of the Alaska Volcanic Observatory and Wilson Alaska Technical Center and his colleagues used these techniques to examine the ground-coupled airwaves produced by recent eruptions at Cleveland, Veniaminof and Pavlof volcanoes in Alaska.

"This study shows how we can expand the use of seismic data by looking at the acoustic waves from volcanic explosions that are recorded on seismometers," explained Fee. "The techniques we used provide an automated way to detect, locate, characterize, and monitor volcanic eruptions, particularly in remote, difficult-to-monitor regions like Alaska."

"We now use these techniques operationally at the Alaska Volcano Observatory and plan to integrate them more in the future," Fee added.

Ground-coupled airwaves or GCAs occur when an acoustic wave in the atmosphere impacts the earth's surface, producing a ground wave that can be detected by seismometers. Volcanic explosions can produce these low-frequency acoustic waves, as well as events such as meteors entering the Earth's atmosphere, and even chemical or nuclear explosions.

"Volcanic explosions can sometimes be difficult to detect seismically, but the GCA can provide unambiguous evidence that a volcano is erupting," said Fee. "We can also use GCA to locate eruptive vents and identify changes in eruption style."

Fee and his colleagues analyzed seismic data from networks installed and operated by the Alaska Volcanic Observatory in remote parts of Alaska and the Aleutian Islands, near volcanoes that had explosive activity between 2007 and 2015.

The researchers examined GCA signals from a May 2013 eruption on the Aleutian Arc's Cleveland volcano, one of the most active but also one of the most remote volcanoes monitored by the observatory. Typically, eruptions from the volcano are detected by satellite fly-overs. But Fee and colleagues show that the May 2013 eruption sequence could be detected--and distinguished from a non-volcanic acoustic signal--by remote seismic networks.

GCA signals were detected from seismic networks around the Veniaminof and Pavlof volcanoes on the Alaskan Peninsula for eruptions taking place in 2007 and 2013. Using the signals, the researchers were able to confirm the location of active vents on Veniaminof and Pavlof. They were also able to distinguish between seismic and acoustic events on the networks, which can be helpful in determining whether the detected signals represent subsurface movement at a volcano or surface explosions that create acoustic waves. For Pavlof in particular, the scientists say in their paper, this distinction could help monitor the hazards produced during explosive degassing by the volcano.

Fee said both GCA signals and regular seismic signals are important for getting a complete picture of how a volcano is behaving. "Infrasound and GCA signals are most effective at telling you what is going on at the volcano at that moment, whether it is erupting or not, and what kind and how much material is coming out of the vent," he said. "Seismic waves from volcanoes provide complementary information on what is going on in the subsurface and are often more effective at forecasting eruptions." 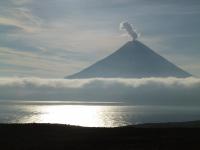