Japan -- Of all the exciting topics in the field of material and biochemical research, one of the hottest by far is unraveling the mysteries of spider silk.

Often claimed to be 'stronger than steel', the protein-based fibers have the potential to change the material world as we know it. However, despite decades of research, nobody has been able to mass produce spider silk, primarily because the exact method of how it's made is still shrouded in mystery.

In a step toward understanding its inner workings, researchers at Kyoto University's Graduate School of Engineering report on a new model for spider silk assembly, reporting that the key to spider silk 'spinning' is a combination of acidification and a process known as liquid-liquid phase separation, or LLPS.

"Spider silk is made of proteins called spidroins. The spider has a gland that is densely filled with spidroins in its liquid state called dope," explains Ali D Malay first author of the study, published in Science Advances.

"This liquid is rapidly converted into the tough and structurally complex silk. To investigate how exactly this is done we decided to go back to the drawing board and look at spidroins itself. So we developed artificial spidroins that closely mimic the ones found in nature."

Developing the protein was no easy task, but they landed on using a specific spidroins called MaSp2, one of the more common spider silk proteins, and that are water soluble.

After isolating their artificial spider silk protein, the team began observing its activity under different chemical conditions, intending to understand what key chemical changes are needed for the liquid phase to turn solid.

"We first saw the the protein gathering into small clusters. But when we added potassium phosphate it instantly began to condense into big high-density droplets," explains Malay. "This is a phenomenon known as liquid-liquid phase separation -- it happens quite often in cells -- and it's when liquid droplets change their size and density according to the surrounding environment."

But this was only one part of the puzzle. What does it take to make this liquid phase into the silk fibers we know so well? The key was pH. As the team lowered the pH of the solution, the globs began to fuse together, forming a fine network of fibers.

Both LLPS and fiber network formation happened so spontaneously that it was visible in real time. Moreover, when the fiber network was placed under mechanical stress it began to organize itself into a hierarchical structure just like spider silk.

"Spider silk often surpasses the most advanced manmade materials today, and making these synthetic fibers often rely on harmful organic solvents and high temperatures. What's incredible here is that we were able to form spider silk using water as solvent, and at ambient temperatures," concludes Keiji Numata who led the study.

"If we can learn to emulate the mechanisms of spider silk spinning, it could have a profound impact on the future of manufacturing."

How does the spider spin its self-assembled silk? 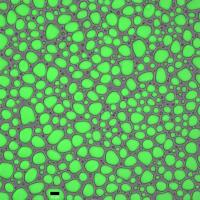