A new technique that uses light to activate chemotherapy drugs in specific cells shows promise as a way to improve the effectiveness of cancer therapies while preventing severe side effects, according to a study published July 9 in Cell. The so-called photopharmacology approach could be used to treat a broad range of tumors with unprecedented precision simply by making existing cancer drugs sensitive to light--an approach that requires less time and effort compared with traditional drug discovery programs.

"We hope that our compounds will one day be used in medicine to deliver a killer blow to many types of localized cancer tumors, without producing side effects, thus improving on standards of care and also providing chemotherapy options for currently untreatable tumors," says co-senior author Oliver Thorn-Seshold of Ludwig-Maximilians-Universität München.

Some of the most successful and widely used chemotherapeutic drugs are inhibitors that interfere with the function of microtubules--components of the cell's skeleton that play a key role in cell proliferation, migration, and survival. But because these drugs do not specifically target cancer cells, they also interfere with the function of normal cells and cause severe side effects, such as heart and nerve damage. As a result, microtubule inhibitors are often limited to relatively low doses that do not provide the best therapeutic benefit.

To overcome this challenge, Thorn-Seshold and his collaborators developed a method for optically controlling microtubule inhibitor drugs currently in clinical trials, with high spatial precision. The strategy involves identifying a fixed structural element that is required for a drug's biological activity, then replacing that element with a flexible hinge that swings open or shut in response to blue light.

"We can then use light to switch the hinged drug on and off, where and when we want, with single-cell precision" says co-senior author Dirk Trauner, also of Ludwig-Maximilians-Universität München. "The upshot is that our compounds retain the powerful anticancer effects of existing microtubule inhibitors, but add the bonus of tissue-specific localization."

The researchers demonstrated that these modified compounds, called photostatins, are effective at inhibiting the proliferation and survival of cells targeted by light, while neighboring cells are unaffected. They can be switched on and off hundreds of times, making them suitable for long-term applications in both the clinic and the lab. Moreover, because they target a critical microtubule subunit that is found in the cells of all plants and animals, they can be used to study or treat a broad range of organisms or processes, even potentially a broad range of diseases in humans.

"We imagine that, since they eliminate systemic side effects, our compounds will be able to be used in medicine at dosages that are truly therapeutic in tumors, thus achieving a much more effective therapy than currently possible," Thorn-Seshold says. "On the research front, we hope that they will allow researchers worldwide to unravel the fine details underlying many important biophysical processes in cells, such as how mitosis is driven, how cells move or invade, and how the genetically determined sequence of embryogenesis is important for correct development."

In future clinical settings, the study authors imagine that patients could wear blue-tinted glasses to treat eye cancer or other eye diseases, while individuals with skin cancer could wear a bandage that delivers light to tumors. On the other hand, internal tumors might be treated with an implantable network of tiny LEDs that blink every few minutes to maintain the chemotherapeutic effect only in the enclosed tumor site.

In the meantime, the researchers are trying to stretch the limits of their technique with more precise and effective compounds, while refining the technique to treat tumors in mice. "The field of photopharmacology is very young, so it may take some time for the pharmaceutical industry to recognize the value of these compounds," Thorn-Seshold says. "Yet, if our ongoing studies are successful, we will have a convincing proposition for further preclinical development, and we are committed to getting as far into real therapy as we can." 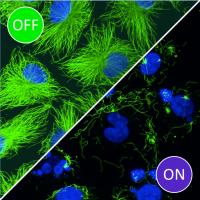