In 2008, scientists will, for the very first time, create a continual profile of ice thickness in the Artic, extending from the Canadian coast across the North Pole to Siberia. At the core of the project lies the crossing of the North Pole by zeppelin. The airship will be equipped with an electromagnetic sensor developed at the Alfred Wegener Institute for Polar and Marine Research, one of the 15 research centres within the Helmholtz Association. The sensational project of French physician Jean-Louis Etienne is financed by the French oil company Total and will be presented in Berlin on April 5.

The extent of sea ice cover in the Arctic Ocean is declining strongly. This reduction in the North represents a stark contrast to sea ice cover in the Antarctic where even a slight increase is detectable. “There is almost no information about regional distribution of ice thickness in the Arctic and Antarctic”, explains Dr Christian Haas, geophysicist at the Alfred Wegener Institute. “This lack of knowledge is a consequence of major methodological problems associated with measuring ice floes of only several metres thickness, and of the logistical difficulties of venturing into the central Arctic.” The development of ice cover in the polar oceans represents one of the key questions in climate research, and hence is among the core research topics during the International Polar Year 2007 / 2008.

An electromagnetic bird above the Arctic

The Alfred Wegener Institute is the only research institute worldwide to have been conducting sporadic measurements of sea ice thickness in the High Arctic, i.e. between Spitsbergen, the North Pole and the Canadian coast. Facilitated by the privately organised, French PoleAirship project, this research can now be significantly advanced. The physician and explorer Jean-Louis Etienne, financially supported by French oil company Total, is providing the unique opportunity to cross the Arctic by airship. During the crossing, the so-called EM-Bird, an instrument specifically developed at the Alfred Wegener Institute to measure ice thickness, will be able to collect ice thickness data for the first time continually and across extensive regions of the whole Arctic. In April of 2008, the airship will fly from Spitsbergen to the Canadian coast via the North Pole, and then on to Alaska, whilst surveying the main sea ice regions in the Arctic. The resulting data set will permit comparisons with previous measurements and can serve as a reference for future campaigns. A continual ice thickness profile, extending from the Canadian coast across the North Pole to the Siberian Arctic, will be the unparalleled first-time product of the expedition. The PoleAirship mission should also be viewed within the context of the large-scale EU project DAMOCLES (Developing Arctic Modelling and Observing Capabilities for Long-term Environmental Studies), ongoing since 2005 and uniting 44 scientific institutions from 10 European countries in their extensive investigations of ocean atmosphere and sea ice.

In April 2007, the PoleAirship project will first venture towards the North Pole without the airship, in order to collect an initial set of reference data by helicopter, as well as to test the accuracy of the measuring technique. For this purpose, scuba divers and a remotely operated vehicle will be used to compare the actual with the electromagnetically determined thickness of press ice backs up to 50 metres thick. The research team will stay in tents on the ice, and will be supplied from aircraft.

Please send us a copy of any published version of this document.

The press conference will take place at April 5, 2007, 10 am at the Hotel Courtyard by Marriott, Berlin City Centre (65 Axel-Springer-Street, 10117 Berlin) Being the responsible scientist of the Alfred-Wegener-Institute for the PoleAirship mission Dr. Christian Haas will be present at the press conference. Your contact person in the public relations department of the Alfred Wegener Institute is Margarete Pauls (Tel: ++49-471-4831-1180, email: medien@awi.de). Your contact person at Total Germany is Delphine Saucier (Tel: ++49-30-20276231, email: Delphine.Saucier@total.de).

The Alfred Wegener Institute (AWI) conducts research in the Arctic, Antarctic and in oceans of temperate and high latitudes. The AWI coordinates polar research in Germany, and provides important infrastructure, such as the research icebreaker Polarstern and research stations in the Arctic and Antarctic for international scientific enterprises. The Alfred Wegener Institute is one of 15 research centres of the 'Helmholtz-Gemeinschaft' (Helmholtz Association), the largest scientific organisation in Germany. 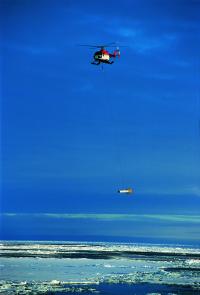