CHICAGO, IL, and ROCHESTER, N.Y., May 7 — Digital medical imaging and information technology from Carestream Health, Inc., is playing a key role in helping The Field Museum of Chicago discover and analyze secrets hidden within its world-class collections.

Carestream Health has donated a computed radiography (CR) system that enables The Field Museum—for the first time—to capture, archive and share digital x-ray images from more than one million priceless specimens and artifacts in its Anthropology collection. The Field Museum is also using a picture archiving and communications system (PACS) from Carestream Health for the management, viewing and storage of the growing collection of digital images managed by the museum’s staff.

“The availability of this advanced x-ray system will have tremendous benefits not only for research, but also for management of our collections,” said Robert D. Martin, the A. Watson Armour III Curator of Biological Anthropology at The Field Museum. “Non-invasive visualization of specimens and artifacts can yield valuable new scientific information, and it can also provide crucial indications for proper conservation of specimens in our care.”

Images of an ancient Egyptian mummy demonstrate how digital images are superior to film images. Recently captured digital images have revealed a previously unknown erosion of the parietal lobes in the mummy’s skull. This could indicate the presence of parasites, anemia or malnourishment shortly before death. Similarly, curators will be looking for signs of spinal cord deterioration in other specimens, which could be a sign of tuberculosis.

“The nice part about this new digital equipment is that it is very fast and the images are so sharp,” said J.P. Brown, Conservator, Anthropology, The Field Museum. “This system allows us to do in a day what it used to take a week to accomplish.”

The CR system has already led to new discoveries, Brown added. A digital image of the pelvis of the same Egyptian mummy revealed that the person was most likely a woman between 30 and 40 years old. Additionally, an image of a Peruvian “false head” (falsa cabeza) revealed the surprising presence of shells inside the artifact. Anthropology Collections Manager Chris Philip identified shells inside the stuffing of the mask. The clarity of the image allowed Invertebrates Collections Manager Jochen Gerber to specify two complete shells as Mesodesma donacium, an edible marine clam inhabiting the waters off the west coast of South America. This may help to answer the tantalizing question of why this “false head” was packed with shells. The shells appear to be a deliberate addition to the filling of the mask, possibly a food offering, but their meaning is unclear since no other specimens with added shells are known.

In another example, an image of the head of a statue of a king from a Sassanian palace in Iraq revealed metal pieces that had been added to the statue as part of a restoration that was probably performed in the late 1940s. Prior to capturing this image, Field Museum conservators had planned to treat the statue with water to soak out salts that had accumulated in it over the years while it was buried in the ground. If they had done so, the metal pieces would have rusted and the pressure from the rust would have caused the piece to break apart. Now—armed with new information—the conservators are developing a method to stabilize the artifact that does not involve immersing it in water.

For several decades, The Field Museum used x-ray film to capture images of its unique collections. “With the CR system, the museum’s staff is realizing the many benefits of digital imaging technology in its day-to-day operations,” said Laryssa Johnson, Marketing Director, Digital Capture Solutions, Carestream Health. “For example, this system—typically used by healthcare facilities worldwide to capture patient x-ray images—is now producing high-quality digital images of the museum’s priceless artifacts for use in ongoing research projects.”

Carestream Health’s CR system is ideal for use with organic objects such as mummies, leather goods and baskets, and can generate excellent images of denser museum pieces such as ceramics, stucco and beads. The company’s digital workstation—also on site—allows the museum to have one centralized image review platform with a powerful database that provides quick and easy access to studies and images.

“As one of the world’s leading educational institutions, The Field Museum’s collection-based research and exhibits help create greater public understanding and appreciation of the world in which we live,” said Diana Nole, President, Digital Capture Solutions, Carestream Health. “Our digital technology is helping the museum’s talented staff further unlock the many mysteries contained within its priceless collections.”

Carestream Health has a special business unit—its Non-Destructive Testing Solutions group—that develops and delivers non-destructive testing systems for a wide variety of industries and businesses around the world. The company has dedicated resources available to the museum/art world for implementing innovative digital systems for capturing images of architectural objects, mummies, dinosaurs, sculptures, paintings, historical artifacts and much more.

1. Mummy being x-rayed
Digital medical imaging and information technology from Carestream Health is being used to x-ray priceless Field Museum artifacts, including this ancient Egyptian mummy. Photo by Karen Bean; courtesy of The Field Museum

2. Mummy image (head 1)
This cross-table x-ray image of the head of an ancient Egyptian mummy was taken recently with new digital medical imaging technology. It is exceptionally clear and reveals a previously unknown erosion of the parietal lobes in the mummy’s skull. This could indicate the presence of parasites, anemia, or malnourishment shortly before death. Note the material under the mummy’s chin, likely a fat-filled linen wadding used in mummies to give the neck a natural shape. Photo courtesy of The Field Museum

3. Mummy image (head 2)
This oblique view of the mummy’s head confirms that the wadding under the mummy’s chin follows the line of the neck. The dried remains of the eyes, which were not removed for mummification, can be also seen. Photo courtesy of The Field Museum

4. Mummy image (pelvis)
This x-ray image of the pelvis of an ancient Egyptian mummy was taken recently with the new CR system. It is revealed that the person was most likely a woman between 30 and 40 years old. The shape of the sciatic notch (wide and relatively shallow) indicates that the sex is female. This is supported by the relatively low height of the pubic symphysis and the wide subpubic angle. The relatively attenuating areas in the abdominal cavity are probably bags filled with sand and/or salt, used as padding. It is possible, though, that these are packages containing mummified organs returned to the body rather than being stored separately in canopic jars, as was often done. Photo courtesy of The Field Museum

5. Mummy image (leg)
This image of the right femur of an ancient Egyptian mummy reveals the absence of new bone growth near the fracture, indicating that the leg was broken after the person died and the body mummified. Photo courtesy of The Field Museum

6. Peruvian mask
This mask or “false head”, made from fiber-stuffed fabric with wood and paint decoration, would originally have been attached to a South American mummy from Pachamac, a coastal site about 15 miles southeast of Lima, Peru. Photo by John Weinstein, courtesy of The Field Museum

7. Mask image
This image of an ancient Peruvian mask or “false head” shows the surprising presence of shells inside the stuffing of the mask. This information may help to answer the tantalizing question of why this “false head” was packed with shells. The shells appear to be a deliberate addition to the filling of the mask, possibly a food offering, but their meaning is unclear since no other specimens with added shells are known. Photo courtesy of The Field Museum

About The Field Museum
Founded in 1893 and in its current building since 1921, The Field Museum is one of the world’s premier natural history museums, housing more than 24 million artifacts and specimens. It is also a major scientific research center, with a presence in scores of countries and with more than 70 scientists working at the museum and around the world in anthropology, botany, conservation, cultural understanding, geology and zoology.

The Field Museum is located at 1400 South Lake Shore Drive and is open daily from 9 a.m. to 5 p.m. except for Christmas Day and New Years Day. For general information and special events please call 312-922-9410 or visit the museum’s interactive web site at www.fieldmuseum.org. For travel information, please call the Illinois Department of Transportation, 312-368-4636, or the RTA Travel Center Hotline, 312-836-7000. 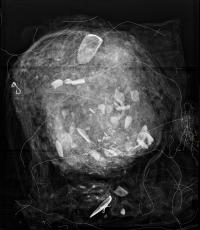 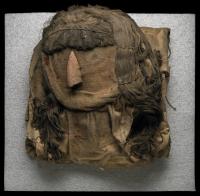