Four pesticides commonly used on crops to kill insects and fungi also kill honeybee larvae within their hives, according to Penn State and University of Florida researchers. The team also found that N-methyl-2-pyrrolidone (NMP) -- an inert, or inactive, chemical commonly used as a pesticide additive -- is highly toxic to honeybee larvae.

"We found that four of the pesticides most commonly found in beehives kill bee larvae," said Jim Frazier, professor of entomology, Penn State. "We also found that the negative effects of these pesticides are sometimes greater when the pesticides occur in combinations within the hive. Since pesticide safety is judged almost entirely on adult honeybee sensitivity to individual pesticides and also does not consider mixtures of pesticides, the risk assessment process that the Environmental Protection Agency uses should be changed."

According to Frazier, the team's previous research demonstrated that forager bees bring back to the hive an average of six different pesticides on the pollen they collect. Nurse bees use this pollen to make beebread, which they then feed to honeybee larvae. To examine the effects of four common pesticides -- fluvalinate, coumaphos, chlorothalonil and chlorpyrifos -- on bee larvae, the researchers reared honeybee larvae in their laboratory. They then applied the pesticides alone and in all combinations to the beebread to determine whether these insecticides and fungicides act alone or in concert to create a toxic environment for honeybee growth and development.

The researchers also investigated the effects of NMP on honeybee larvae by adding seven concentrations of the chemical to a pollen-derived, royal jelly diet. NMP is used to dissolve pesticides into formulations that then allow the active ingredients to spread and penetrate the plant or animal surfaces onto which they are applied. The team fed their treated diet, containing various types and concentrations of chemicals, to the laboratory-raised bee larvae.

The team's results are reported in the current issue of PLoS ONE.

"We found that mixtures of pesticides can have greater consequences for larval toxicity than one would expect from individual pesticides," Frazier said.

Among the four pesticides, honeybee larvae were most sensitive to chlorothalonil. They also were negatively affected by a mixture of chlorothalonil with fluvalinate. In addition, the larvae were sensitive to the combination of chlorothalonil with the miticide coumaphos. In contrast, the addition of coumaphos significantly reduced the toxicity of the fluvalinate and chlorothalonil mixture. According to Chris Mullin, professor of entomology, Penn State, these pesticides may directly poison honeybee larvae or they may indirectly kill them by disrupting the beneficial fungi that are essential for nurse bees to process pollen into beebread.

"Chronic exposure to pesticides during the early life stage of honeybees may contribute to their inadequate nutrition or direct poisoning with a resulting impact on the survival and development of the entire bee brood," he said. The researchers note that fluvalinate and coumaphos are commonly used by beekeepers on crops to control Varroa mites, and are found to persist within beehives for about five years. Chlorothalonil is a broad-spectrum agricultural fungicide that is often applied to crops in bloom when honeybees are present for pollination because it is currently deemed safe to bees. Chlorpyrifos is a widely used organophosphate in crop management.

"Our findings suggest that the common pesticides chlorothalonil, fluvalinate, coumaphos and chloropyrifos, individually or in mixtures, have statistically significant impacts on honeybee larval survivorship," Mullin said. "This is the first study to report serious toxic effects on developing honeybee larvae of dietary pesticides at concentrations that currently occur in hives." The team also found that increasing amounts of NMP corresponded to increased larval mortality, even at the lowest concentration tested.

"There is a growing body of research that has reported a wide range of adverse effects of inactive ingredients to human health, including enhancing pesticide toxicities across the nervous, cardiovascular, respiratory and hormone systems," Mullin said. "The bulk of synthetic organic chemicals used and released into U.S. environments are formulation ingredients like NMP, which are generally recognized as safe. They have no mandated limits on their use and their residues remain unmonitored.

"Multi-billion pounds of these inactive ingredients overwhelm the total chemical burden from the active pesticide, drug and personal-care ingredients with which they are formulated. Among these co-formulants are surfactants and solvents of known high toxicity to fish, amphibians, honey bees and other non-target organisms. While we have found that NMP contributes to honeybee larvae mortality, the overall role of these inactive ingredients in pollinator decline remains to be determined."

Other authors on the paper include Wanyi Zhu, graduate research assistant in entomology, Penn State, and Daniel Schmehl, postdoctoral associate in entomology and nematology, University of Florida.

The National Honey Board, the U.S. Department of Agriculture-National Institute of Food and Agriculture-Agriculture and Food Research Initiative-Coordinated Agricultural Projects and the Foundational Award programs funded this research. 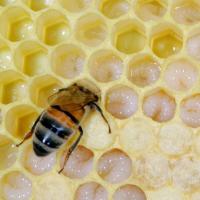