New fossils from Belgium have shed light on the origin of some of the most well-known, and well-loved, modern mammals. Cats and dogs, as well as other carnivorous mammals (like bears, seals, and weasels), taxonomically called 'carnivoraformes', trace their ancestry to primitive carnivorous mammals dating back to 55 million years ago (the beginning of the time period called the Eocene). A study, published in the most recent issue of the Journal of Vertebrate Paleontology, discusses the origins of this group and describes new specimens of one of the earliest of these primitive taxa.

The species, dubbed Dormaalocyon latouri, had previously been found at the Belgian locality of Dormaal (thus the name of the genus). New specimens found by lead author Floréal Solé and his colleagues, allow for a better characterization of the animal, and its placement in the evolutionary history of carnivores. "Its description allows better understanding of the origination, variability and ecology of the earliest carnivoraforms", says Solé.

The new specimens include over 250 teeth and ankle bones. More teeth allow for a description of the entire tooth row of Dormaalocyon, while previous finds only included two upper molars. The new finds even include the deciduous teeth (or 'baby teeth'). The fact that these teeth are very primitive looking, and from a very early time, implies that Dormaalocyon is close to the origin of carnivoraforms, and that this origin may have been in Europe.

The ankle bones suggest that Dormaalocyon was arboreal, living and moving through the trees. Previous reconstructions of the environment at Dormaal 55 million years ago inferred a warm, humid, and wooded area. This was a time soon after an event called the Paleocene-Eocene Thermal Maximum (or PETM). This extremely warm period affected the evolution of many mammal groups, including carnivoraforms. Dr. Solé believes that the fact that Dormaalocyon was arboreal, and that carnivoraforms made their way to North America around this time, "supports the existence of a continuous evergreen forest belt at high latitudes during the PETM".

Although close to the origin of carnivoraforms, the fossils suggest there were even more primitive species in the group in an earlier time period, the Paleocene. Says Solé, "The understanding of the origination of the carnivoraforms is important for reconstructing the adaptation of placental mammals to carnivorous diet. Therefore, Dormaalocyon provides information concerning the evolution of placental mammals after the disappearance of the largest dinosaurs (at the Cretaceous–Paleogene extinction event). Our study shows that the carnivoraforms were very diversified at the earliest Eocene, which allows hypothesizing that they were probably already diversified during the latest Paleocene". This means there are more fossils out there to be found that can answer the question of the origin of this beloved modern group.

About the Journal of Vertebrate Paleontology

Other Experts Not Associated with this Study

New fossils shed light on the origins of lions, and tigers, and bears (oh my!) 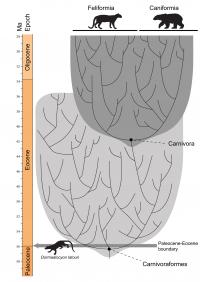