A new artificial joint restores important wrist-like movements to forearm amputees, something which could dramatically improve their quality of life. A group of researchers led by Max Ortiz Catalan, Associate Professor at Chalmers University of Technology, Sweden, have published their research in the journal IEEE Transactions on Neural Systems & Rehabilitation Engineering.

For patients missing a hand, one of the biggest challenges to regaining a high level of function is the inability to rotate one's wrist, or to 'pronate' and 'supinate'. When you lay your hand flat on a table, palm down, it is fully pronated. Turn your wrist 180 degrees, so the hand is palm up, and it is fully supinated.

Most of us probably take it for granted, but this is an essential movement that we use every day. Consider using a door handle, a screwdriver, a knob on a cooker, or simply turning over a piece of paper. For those missing their hand, these are much more awkward and uncomfortable tasks, and current prosthetic technologies offer only limited relief to this problem.

"A person with forearm amputation can use a motorised wrist rotator controlled by electric signals from the remaining muscles. However, those same signals are also used to control the prosthetic hand," explains Max Ortiz Catalan, Associate Professor at the Department for Electrical Engineering at Chalmers.

"This results in a very cumbersome and unnatural control scheme, in which patients can only activate either the prosthetic wrist or the hand at one time and have to switch back and forth. Furthermore, patients get no sensory feedback, so they have no sensation of the hand's position or movement."

The new artificial joint works instead with an osseointegrated implant system developed by the Sweden-based company, Integrum AB - one of the partners in this project. An implant is placed into each of the two bones of the forearm - the ulna and radius - and then a wrist-like artificial joint acts as an interface between these two implants and the prosthetic hand. Together, this allows for much more naturalistic movements, with intuitive natural control and sensory feedback.

See a video of the joint in action here.

Patients who have lost their hand and wrist often still preserve enough musculature to allow them to rotate the radius over the ulnar - the crucial movement in wrist rotation. A conventional socket prosthesis, which is attached to the body by compressing the stump, locks the bones in place, preventing any potential wrist rotation, and thus wastes this useful movement.

"Depending on the level of amputation, you could still have most of the biological actuators and sensors left for wrist rotation. These allow you to feel, for example, when you are turning a key to start a car. You don't look behind the wheel to see how far to turn - you just feel it. Our new innovation means you don't have to sacrifice this useful movement because of a poor technological solution, such as a socket prosthesis. You can continue to do it in a natural way," says Max Ortiz Catalan.

Biomedical Engineers Irene Boni and Jason Millenaar were at Chalmers as visiting international students. They worked with Dr. Ortiz Catalan at his Biomechatronics and Neurorehabilitation Lab at Chalmers, and with Integrum AB on this project.

"In tests designed to measure manual dexterity, we have shown that a patient fitted with our artificial joint scored far higher compared to when using conventional socket technology," explains Jason Millenaar.

"Our new device offers a much more natural range of movement, minimising the need for compensatory movements of the shoulder or torso, which could dramatically improve the day to day lives of many forearm amputees," says Irene Boni.

Dr. Marco Controzzi at the Biorobotics Institute, Sant'Anna School of Advanced Studies in Italy also participated in the research.

Dr. Max Ortiz Catalan is an Associate Professor at Chalmers University of Technology, Sweden, and head of the Biomechatronics and Neurorehabilitation Laboratory (@ChalmersBNL)

Irene Boni was a visiting student from the Sant'Anna School of Advanced Studies in Italy, and Jason Millenaar from Delft University of Technology in the Netherlands.

The researchers found that restoring the full range of movement to all degrees of freedom in which the forearm bones can move was not necessary - the key parameter for returning a naturalistic wrist motion is the 'axial', or circular, motion of the ulna and radius bones.

"The wrist is a rather complicated joint. Although it is possible to restore full freedom of movement in the ulnar and radial bones, this could result in discomfort for the patient at times. We found that axial rotation is the most important factor to allow for naturalistic wrist movement without this uncomfortable feeling," explains Max Ortiz Catalan.

The development was finalised within the Horizon 2020 framework programme for Research and Innovation under the DeTOP project. 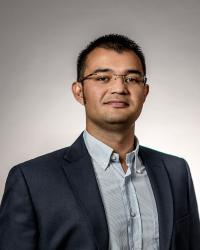 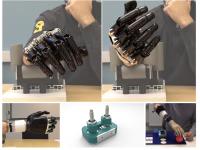