Existing genetic variation in natural populations of Mediterranean mussels allows them to adapt to declining pH levels in seawater caused by carbon emissions. A new study by biologists from the University of Chicago shows that mussels raised in a low pH experimental environment grew smaller shells than those grown at normal pH levels, but the overall survival rate of mussels grown under both conditions was the same.

The surviving population in the low pH environment differed genetically from the others, suggesting that genetic variants that already exist in a subset of the natural population of mussels allowed them to adapt to the harsher new environment. This could be good news for conservationists and seafood lovers alike, as the culinary delicacy finds ways to adjust to the changing seas.

"The hope is there are already a few individuals in the species that already have some genetic makeup that allows them to withstand the change in the environment," said Mark Bitter, a graduate student at UChicago who led the study, published December 20, 2019, in Nature Communications. "This effectively allows evolution to work a lot faster if you're not waiting around for some new mutation to arise."

As humans continue to burn more and more fossil fuels, the oceans absorb roughly one third of the extra carbon released into the atmosphere. This in turn causes pH levels of seawater to drop, making it more acidic. Mussels, oysters and certain species of algae have difficulty producing their hard, calcium carbonate shells in this environment. In a 2016 study, Cathy Pfister, PhD, the senior author of the new study and co-director of the Microbiome Center at UChicago, showed that modern mussel shells collected in the Pacific Northwest were on average 32 percent thinner than those from the 1970s.

Bitter and his teammates worked at the Laboratoire d'Oceanographie in Villefranche-sur-Mer, on the Mediterranean coast of France. The project was sponsored by the France and Chicago Collaborating in the Sciences (FACCTS) program, designed to encourage collaboration among UChicago scientists and research teams at institutions of higher learning in France.

Over the course of three research trips to France in 2016 and 2017, researchers collected specimens of Mytilus galloprovincialis, the Mediterranean mussel, one of several mussel species that provides a valuable food source worldwide. They carefully bred dozens of combinations from 12 females and 16 males to ensure a genetically diverse population of larvae -- 192 different combinations total.

With that starting population, they divided the larvae into two groups: one to develop in water with the normal, ambient pH level of 8.1, and the other in seawater with a pH of 7.4. This value is actually lower than what these mussels currently experience in the wild. The global average pH of the oceans is about 8.0; Mediterranean mussels can encounter values down to 7.7 in some locations. The lower 7.4 pH used in the experiment falls below projected global mean declines in seawater pH over the next 100 years, but may be encountered by marine species inhabiting coastal habitats before the end of the century.

The mussel larvae, over 1 million individuals in total, were kept in a series of buckets, with carbon dioxide-manipulated seawater pumped in from head tanks to carefully regulate the pH levels in the larval cultures. The buckets were equipped with motorized paddles to circulate the water naturally. As the larvae grew and developed shells, they ultimately latched on to the vertical sides of the buckets.

Over the span about six weeks, Bitter and his teammates took samples every few days to measure shell size and analyze the genetic makeup of the surviving larvae. In general, the mussels in the ambient pH conditions grew their shells at a faster rate than the ones in lower pH water, although after two weeks the low pH population mostly caught up. Bitter suspects this may be because the individuals most vulnerable to low pH conditions died before this point, and the survivors were able to continue growing normally.

When the researchers analyzed the genetic variation in the two test groups, they saw strong signatures of selection in the low pH conditions, meaning that a unique genetic background emerged among the mussels able to withstand that environment. After day six, they separated the fastest shell growers from the slowest in each pH environment. Shell size is an indicator of fitness -- the mussels with the largest shells were likely the strongest competitors. But if one mussel grows its shell the fastest in current ocean conditions, does that mean it's also going to do well in a more extreme, low pH scenario?

"The answer is no," Bitter said. "There seems to be a very unique kind of genetic makeup of the individuals that end up growing best in the low pH environment, relative to the ambient conditions."

At the end of the experiment, there was no difference in the total survival of mussels raised in either environment. This would seem like rare good news in the context of rapidly advancing climate change: a species that already has the ability to adapt to harsher conditions. But Bitter points out that pH is just one variable expected to change in the near future.

"Some of these individuals are really good at dealing with this huge reduction in pH. But what if you also reduce salinity or change the temperature substantially?" he said. "Just because you can run a marathon doesn't mean you can turn around and swim right after that. It's a multi-stressor scenario."

He says this study shows why it's important to focus conservation and aquaculture efforts on maintaining broad genetic diversity among mussel populations, since the ability to adapt to near future conditions appears to exist already in the gene pool.

"We have already seen substantial declines in shell size of one mussel species in nature, but it does look like there is this capacity for this species to adapt," he said, "which is some good news amidst a lot of bleakness."

The study, "Standing genetic variation fuels rapid adaptation to ocean acidification," was supported by the National Science Foundation, the Department of Education, the European Commission and the UChicago FACCTS program. 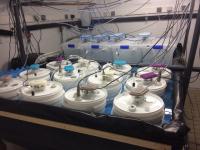