NASA's Global Hawk 872 flew over Tropical Storm Humberto on Sept. 16 and 17 after it was reborn from remnants of its earlier life cycle. Data from NASA 872 showed that the core had a hybrid structure.

A sonde is a device that measures winds, temperature, and humidity. The instrument is called a dropsonde because it is dropped out of the tail of the Global Hawk. The dropsonde is an 11-inch long tube - about the size of the cardboard paper tube for a paper towel roll

HS3 mission scientists at NASA Wallops combined dropsonde data with a satellite image from NOAA's GOES-East satellite. The dropsonde data, centered on 0000 UTC/8 p.m. EDT Sept. 17, was overlaid over a GOES infrared image and revealed that Humberto was a hybrid storm. "In a typical tropical storm or hurricane, a warm core would be found at most levels," said Scott Braun, HS3 Mission Principal Investigator from NASA's Goddard Space Flight Center in Greenbelt, Md. "The structure of Humberto was the result of a union of the tropical storm with an upper-level cold low, so it had a structure that was more of a hybrid of a tropical and extratropical system."

The image showed temperature at 800 hPa or Hectopascals and 400 hPa. The height of the pressure surfaces varies, but 400 hPa is roughly 7.5 km (24,600 feet) and 800 hPa is about 2.1 km (6,890 feet). The images also showed wind speed and direction using wind barbs. At 800 hPa, a warm core was found at the center of the circulation while at 400 hPa, a cold core was found with the center of circulation located to the north-northwest of the low level center.

HS3 is a mission that brings together several NASA centers with federal and university partners to investigate the processes that underlie hurricane formation and intensity change in the Atlantic Ocean basin. The HS3 mission will operate in 2013 between Aug. 20 and Sept. 23. 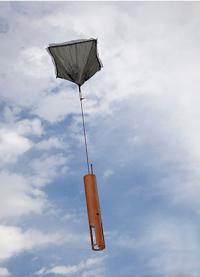 Image of a Dropsonde