(Millbrook, NY) In the Grand Canyon reach of the Colorado River, two species play an outsized role in the fate of mercury in the aquatic ecosystem, and their numbers are altered by flood events. So reports new research, published in Science Advances, that is among the first to meld ecotoxicology and ecosystem ecology to trace how mercury flows through aquatic food webs and then spreads to land.

Mercury is an environmental contaminant that occurs in ecosystems globally. In its organic form, it is a potent neurotoxin that can harm people and wildlife. Mercury accumulation in animals and how it magnifies along food chains is well studied. Less well understood are the pathways mercury takes through food webs to reach top predators, such as fish and birds, and how those pathways might change after large ecosystem disturbances, such as floods.

Emma Rosi is an aquatic ecologist at Cary Institute of Ecosystem Studies and co-lead author on the paper. She explains, "By combining data on mercury concentrations in aquatic life with well-studied food webs, we were able to reveal how mercury moves through an ecosystem. We found that flooding and an invasive species both influenced the flow of this contaminant of global concern."

The traits of organisms living in an ecosystem - their physiology, what they eat, and what eats them - determine contaminant movement and exposure. These factors have rarely been included in models of contaminant flux and fate. "Pairing contaminant concentrations and highly detailed food webs has the potential to improve the management of contaminants in ecosystems," Rosi notes.

To study these pathways, the research team developed mercury-based food webs for six sites spanning 225 miles of the Colorado River, extending downstream from the Glen Canyon Dam in Grand Canyon National Park. Food web sampling took place seasonally over two years. At each site, they measured algae, invertebrates, and fish to determine who was eating what - and what that meant for mercury exposure at each level of the food web.

Insects (blackflies and midges) and invasive New Zealand mudsnails were the dominant invertebrates in the river. These animals play a vital role in moving energy and contaminants from the bottom of the food web to fish predators at the top. Fish included native Bluehead Sucker, Flannelmouth Sucker, Speckled Dace, and Humpback Chub, as well as non-native species such as Common Carp, Fathead Minnow, and Rainbow Trout.

The stomach contents of invertebrates and fish were assessed to identify what they ate and in what amounts. Algae, detritus, and animals were analyzed for mercury concentrations and, combined with the diet data, the team estimated the amount of mercury that animals were consuming throughout the year.

Algae and tiny particles of detritus were the source of 80% of mercury flowing to invertebrates. In sites closest to the dam, invasive mudsnails dominated the food webs. Trout were the only fish in this part of the river, and they are unable to digest mudsnails. Mercury accumulated by the snails did not move up the food chain. Because the snails are fully aquatic, mercury cycled back into the river's detrital food web when they died.

Blackfly larvae were the source of 56-80% of the mercury flowing to fish. Blackflies are preferred prey for fish, such as Rainbow Trout, and blackflies had higher mercury contaminations compared to other invertebrates. Blackflies that escape predation and emerge from the river as flying adults move mercury from the river to land. This can expose terrestrial predators, such as birds and bats, to mercury that started out in the river.

The amount of mercury that blackflies moved to land was dependent on the number of hungry fish in any part of the river. At some sites, fish ate nearly 100% of the blackfly larvae, leaving few left to emerge. At other sites, there were a lot more blackflies than the fish could eat. When these blackflies emerged as adults, the mercury inside them hitched a ride to terrestrial food webs along the river.

One year into sampling, the study sites were flooded as part of a planned dam release. The team was able to explore the effects of the flood on mercury movement in the food webs. At sites near the dam, the flood washed away large numbers of New Zealand mudsnails and led to a boom in blackfly populations. With the rise in blackflies, more mercury flowed to trout. Because trout gobbled up nearly all the blackflies in their larval form, very little of the mercury accumulated in these abundant insects was transported to land by the flying adults.

Rosi explains, "Changes to the animal populations in an ecosystem will impact how mercury moves through a food web. This was especially apparent at sites where flooding changed the proportion of blackflies relative to fish. Flooding dramatically altered mercury pathways in the simple tailwater food web near the dam, but not in the more complex food webs downstream."

"Invasive species and dams are common in rivers globally, and both factors were at play in the Grand Canyon reach of the Colorado River," Rosi says. "We found that flooding changed the species present at our study sites, and mercury flow changed with those shifts."

"Understanding the factors that control the movement of mercury through food webs can help resource managers protect ecosystems that are susceptible to mercury pollution," says David Walters, USGS scientist and co-lead author of the study.

Rosi concludes, "This study is exciting because it sheds light on the depth of understanding we can achieve when we merge ecological and ecotoxicological thinking. Species traits, animal populations, predator-prey interactions, and disturbance can all influence the movement of contaminants in the environment. Understanding the complex interplay of these factors can improve risk management of animal exposures in the environment."

This work was funded by the USGS Cooperative 644 Agreement 05WRAG0055 and the USGS Environmental Health Contaminant Biology Program.

Cary Institute of Ecosystem Studies is an independent nonprofit center for environmental research. Since 1983, our scientists have been investigating the complex interactions that govern the natural world and the impacts of climate change on these systems. Our findings lead to more effective management and policy actions and increased environmental literacy. Staff are global experts in the ecology of: cities, disease, forests, and freshwater 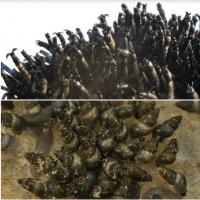