A 3-D view of the storm was created at Goddard that showed the estimated relative heights of storms within tropical cyclone Kenanga. Those heights are based on measurements by the GPM satellite's radar (DPR Ku Band) blended with estimates from Japan's HIMAWARI-8 satellite's infrared temperatures. GPM's radar probes of Kenanga's eastern side indicated that storm tops in that part of the tropical cyclone were reaching heights above 12.2 km (7.6 miles). GPM is a joint mission between NASA and the Japan Aerospace Exploration Agency, JAXA.

On Dec. 19 at 2:53 a.m. EST (0753 UTC) the Atmospheric Infrared Sounder or AIRS instrument aboard NASA's Aqua satellite captured temperature data from Tropical Cyclone Kenanga, using infrared light. The most powerful storms, with coldest cloud top temperatures appeared around the eye and were colder than minus 63 degrees Fahrenheit (minus 53 degrees Celsius). Satellite data showed that the eye is about 25 nautical miles in diameter and that the southern side of the storm appeared to be elongating, a sign of weakening.

Kenanga is now expected to gradually weaken as the tropical cyclone moves toward the southwest over progressively cooler sea surface temperature. 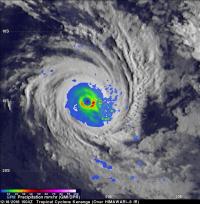 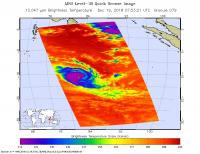