Video game designers are always striving to make games more lifelike, but they'll have a hard time topping what Stanford researcher Ingmar Riedel-Kruse is up to. He's introducing life itself into games.

Riedel-Kruse and his lab group have developed the first video games in which a player's actions influence the behavior of living microorganisms in real time – while the game is being played.

These "biotic games" involve a variety of basic biological processes and some simple single-celled organisms (such as paramecia) in combination with biotechnology.

The goal is for players to have fun interacting with biological processes, without dealing with the rigor of conducting a formal experiment, said Riedel-Kruse, an assistant professor of bioengineering.

"We hope that by playing games involving biology of a scale too small to see with the naked eye, people will realize how amazing these processes are and they'll get curious and want to know more," he said.

"The applications we can envision so far are on the one hand educational, for people to learn about biology, but we are also thinking perhaps we could have people running real experiments as they play these games.

"That is something to figure out for the future, what are good research problems which a lay person could really be involved in and make substantial contributions. This approach is often referred to as crowd-sourcing."

Applying their lab equipment and knowledge to game development, Riedel-Kruse's group came up with eight games falling broadly into three classes, depending on whether players directly interact with biological processes on the scale of molecules, single cells or colonies of single cells.

The results of their design efforts are presented in a paper published in the 10th anniversary issue of Lab on a Chip (the first issue of 2011), published by the Royal Society of Chemistry. The paper is available online now.

Initially, Riedel-Kruse said, the researchers just wanted to see whether they could design such biotic games at all, so this first round of development produced fairly simple games.

"We tried to mimic some classic video games," he said. For example, one game in which players guide paramecia to "gobble up" little balls, a la Pac-Man, was christened PAC-mecium. Then there is Biotic Pinball, POND PONG and Ciliaball. The latter game is named for the tiny hairs, called cilia, that paramecia use in a flipper-like fashion to swim around – and in the game enables the kicking of a virtual soccer ball.

The basic design of the games involving paramecia – the single-celled organisms used in countless biology experiments from grade school classes to university research labs – consists of a small fluid chamber within which the paramecia can roam freely. A camera sends live images to a video screen, with the "game board" superimposed on the image of the paramecia. A microprocessor tracks the movements of the paramecia and keeps score.

The player attempts to control the paramecia using a controller that is much like a typical video game controller. In some games, such as PAC-mecium, the player controls the polarity of a mild electrical field applied across the fluid chamber, which influences the direction the paramecia move. In Biotic Pinball, the player injects occasional whiffs of a chemical into the fluid, causing the paramecia to swim one direction or another.

Riedel-Kruse emphasized that paramecia, being single-celled organisms, lack a brain and the capacity to feel pain. "We are talking about microbiology with these games, very primitive life forms. We do not use any higher-level organisms," he said. "Since multiple test players raised the question of exactly where one should draw this line, these games could be a good tool to stimulate discussions in schools on bioethical issues."

The game on the molecular level involves a common laboratory technique called polymerase chain reaction, or PCR, an automated process that lets researchers make millions of copies of an organism's DNA in as little as two hours.

In this game, called PolymerRace, the player is linked to the output of a PCR machine that is running different reactions simultaneously. While the reactions are running, the players can bet on which reactions will be run the fastest.

"The game PolymerRace is inspired by horse races, where you have different jockeys riding different horses," Riedel-Kruse said. "There is a little bit of biomolecular logic involved and a little bit of chance."

The third game uses colonies of yeast cells that players have to distinguish based on their bread-vinegar-like smell – an olfactory stimulus anyone can experience just by walking into a bakery.

"The idea is that while we as humans play the game, we interact with real biological processes or material," he said. His research group thinks that aspect of the games could help motivate children and even adults to learn more about biology, which is increasingly important to society.

"We would argue that modern biotechnology will influence our life at an accelerating pace, most prominently in the personal biomedical choices that we will be faced with more and more often," Riedel-Kruse said. "Therefore everyone should have sufficient knowledge about the basics of biomedicine and biotechnology. Biotic games could promote that."

Riedel-Kruse wants to maximize the educational potential of these games to enable lay people to contribute to biomedical research. The team hopes that by publishing his group's initial efforts, other researchers in the life sciences will be prompted to explore how their own research could be adapted to "biotic" video games.

Fold-It and EteRNA were developed to address specific research questions. Fold-It was strictly a simulation; and although EteRNA will actually test some proposed structures in the laboratory, the players themselves do not have direct interaction with biological processes in real time as in Riedel-Kruse's biotic games.

Part of Riedel-Kruse's continuing work will include close collaborations with Rhiju Das, an assistant professor of biochemistry at Stanford and one of the developers of EteRNA, and Daniel Schwartz, professor in the School of Education at Stanford. The three co-founded the "Bio-X.Game Center" to develop and apply biotic games to education and research. 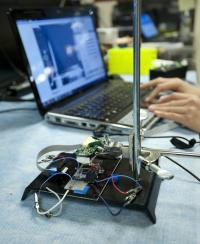