November 9, 2018 - Wildtype Books has published Sydney Brenner's 10-on-10: The Chronicles of Evolution, a richly illustrated volume that brings readers on a whirlwind tour through 14 billion years of evolutionary history, from the beginnings of the universe to the rise of humankind and beyond.

The brainchild of Nobel laureate Sydney Brenner, a genetics pioneer who discovered how to read the code of life, the book presents insights from 24 prominent thinkers on how humans found their place in the universe.

It walks us through ten logarithmic scales of time from the Big Bang (10^10 years ago) to the present (10^1 years), spanning the appearance of multicellular life forms, the evolution of humans, and the emergence of language, culture and technology.

Among the world-renowned experts who contributed to the book are:

"This wonderfully anthropocentric and chronocentric book throws ten logs on the fiery topics of evolution," said Professor George Church of Harvard University. "A must-read--next to Hawking's A Brief History of Time and Bryson's A Short History of Nearly Everything." 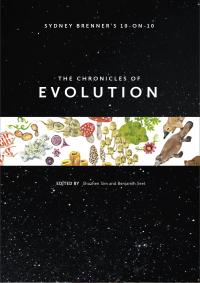 Sydney Brenner's 10-on-10: The Chronicles of Evolution Cover

Sydney Brenner's 10-on-10: The Chronicles of Evolution Sample Page on Fish