Deforestation is suspected to have contributed to the mysterious collapse of Mayan civilization more than 1,000 years ago. A new study shows that the forest-clearing also decimated carbon reservoirs in the tropical soils of the Yucatan peninsula region long after ancient cities were abandoned and the forests grew back.

The findings, published in the journal Nature Geoscience, underscore how important soils and our treatment of them could be in determining future levels of greenhouse gases in the planet's atmosphere.

The Maya began farming around 4,000 years ago, and the spread of agriculture and building of cities eventually led to widespread deforestation and soil erosion, previous research has shown. What's most surprising in the new study is that the soils in the region haven't fully recovered as carbon sinks in over a millennium of reforestation, says McGill University geochemist Peter Douglas, lead author of the new paper.

"When you go to this area today, much of it looks like dense, old-growth rainforest," says Douglas, an Assistant Professor of Earth and Planetary Sciences at McGill. "But when you look at soil carbon storage, it seems the ecosystem was fundamentally changed and never returned to its original state."

Soil is one of the largest storehouses of carbon on Earth, containing at least twice as much carbon as today's atmosphere. Yet scientists have very little understanding of how soil carbon reservoirs change on timescales longer than a decade or so. The new study, along with other recently published research, suggests that these reservoirs can change dramatically on timescales spanning centuries or even millennia.

To investigate these long-term effects, Douglas and his co-authors examined sediment cores extracted from the bottom of three lakes in the Maya Lowlands of southern Mexico and Guatemala. The researchers used measurements of radiocarbon, an isotope that decays with time, to determine the age of molecules called plant waxes, which are usually stored in soils for a long time because they become attached to minerals. They then compared the age of wax molecules with that of plant fossils deposited with the sediments.

The team - which included scientists from Yale University, ETH Zurich, the University of Florida and the University of Wisconsin-Superior - found that once the ancient Maya began deforesting the landscape, the age difference between the fossils and the plant waxes went from being very large to very small. This implies that carbon was being stored in soils for much shorter periods of time.

The project stemmed from research that Douglas had done several years ago as a PhD student at Yale, using plant-wax molecules to trace past climate change affecting the ancient Maya. At the same time, work by other researchers was indicating that these molecules were a good tracer for changes in soil-carbon reservoirs. "Putting these things together, we realized there was an important data-set here relating ancient deforestation to changes in soil carbon reservoirs," Douglas explains.

"This offers another reason - adding to a long list - to protect the remaining areas of old-growth tropical forests in the world," Douglas says. "It could also have implications for how we design things like carbon offsets, which often involve reforestation but don't fully account for the long-term storage of carbon." (Carbon offsets enable companies or individuals to offset their greenhouse-gas emissions by purchasing credits from environmental projects, such as tree-planting.)

The technique used by the researchers has been developed only recently. In the years ahead, "it would be great to analyze tropical forests in other regions of the world to see if the same patterns emerge -- and to see if past human deforestation and agriculture had an impact on soil carbon reservoirs globally," Douglas says. "I'm also very interested in applying this technique to permafrost regions in Canada to see what happened to carbon stored in permafrost during previous periods of climate change."

Funding for this work was provided in part by the U.S. National Science Foundation and the Italian Ministry of the Environment. 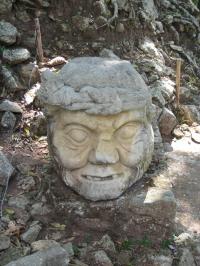 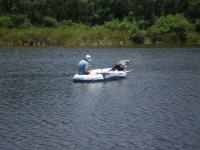