PULLMAN, Wash.—Researchers led by a Washington State University biologist have found that arid areas, among the biggest ecosystems on the planet, take up an unexpectedly large amount of carbon as levels of carbon dioxide increase in the atmosphere. The findings give scientists a better handle on the earth's carbon budget—how much carbon remains in the atmosphere as CO2, contributing to global warming, and how much gets stored in the land or ocean in other carbon-containing forms.

"It has pointed out the importance of these arid ecosystems," said R. Dave Evans, a WSU professor of biological sciences specializing in ecology and global change. "They are a major sink for atmospheric carbon dioxide, so as CO2 levels go up, they'll increase their uptake of CO2 from the atmosphere. They'll help take up some of that excess CO2 going into the atmosphere. They can't take it all up, but they'll help."

The findings, published in the journal Nature Climate Change, come after a novel 10-year experiment in which researchers exposed plots in the Mojave Desert to elevated carbon-dioxide levels similar to those expected in 2050. The researchers then removed soil and plants down to a meter deep and measured how much carbon was absorbed.

"We just dug up the whole site and measured everything," said Evans.

The idea for the experiment originated with scientists at Nevada's universities in Reno and Las Vegas and the Desert Research Institute. Evans was brought in for his expertise in nutrient cycling and deserts, while researchers at the University of Idaho, Northern Arizona University, Arizona State University and Colorado State University also contributed.

Funding came from the U.S. Department of Energy's Terrestrial Carbon Processes Program and the National Science Foundation's Ecosystem Studies Program. The work addresses one of the big unknowns of global warming: the degree to which land-based ecosystems absorb or release carbon dioxide as it increases in the atmosphere.

Forest soils have more organic matter and, square foot for square foot, hold much more carbon. But because arid soils cover so much area, they can have an outsize role in the earth's carbon budget and in how much the earth warms as heat-trapping gases accumulate in the atmosphere.

Working on the Nevada National Security Site, the researchers marked off nine octagonal plots about 75 feet in diameter. Air with 380 parts-per-million concentrations of CO2, the current CO2 levels, was blown over three plots. Three received no extra air. Three were exposed to concentrations of 550 parts per million, the CO2 levels expected in 2050.

The CO2 was fed through PVC pipes ringing the plots and had a specific chemical fingerprint that could be detected when the soil, plants and other biomass were analyzed.

The analysis, done by Benjamin Harlow in WSU's Stable Isotope Core Laboratory, suggests that arid lands may increase their carbon uptake enough in the future to account for 15 to 28 percent of the amount currently being absorbed by land surfaces.

Overall, said Evans, rising CO2 levels may increase the uptake by arid lands enough to account for 4 to 8 percent of current emissions.

The experiment did not account for other possible changes stemming from climate change, like varying precipitation and warming temperatures.

Still, said Evans, "I was surprised at the magnitude of the carbon gain, that we were able to detect it after 10 years, because 10 years isn't very long in the life of an ecosystem."

While forest ecosystems tend to store carbon in plant matter, the Mojave researchers found most carbon was being taken up by increased activity in the rhizosphere, a microorganism-rich area around the roots.

From an optimistic point of view, the research suggests that, come 2050, arid ecosystems will be doing more than their fair share of taking earth-warming carbon out of the atmosphere. But a potential cause for concern is what happens to these ecosystems as the planet's population grows and people look for places to develop and live.

"Land is extremely valuable," said Evans. "A lot of growth may occur in these areas that are fairly arid and we don't know what that's going to do then to the carbon budget of these systems." 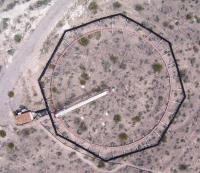