Through careful study of an ancient ancestor of modern turtles, researchers now have a clearer picture of how the turtles' most unusual shell came to be. The findings, reported on May 30 in Current Biology, a Cell Press publication, help to fill a 30- to 55-million-year gap in the turtle fossil record through study of an extinct South African reptile known as Eunotosaurus.

"The turtle shell is a complex structure whose initial transformations started over 260 million years ago in the Permian period," says Tyler Lyson of Yale University and the Smithsonian. "Like other complex structures, the shell evolved over millions of years and was gradually modified into its present-day shape."

The turtle shell isn't really just one thing—it is made up of approximately 50 bones. Turtles are the only animals that form a shell through the fusion of ribs and vertebrae. In all other animals, shells are formed from bony scales on the surface; they don't stick their bones on the outsides of their bodies.

"The reason, I think, that more animals don't form a shell via the broadening and eventually suturing together of the ribs is that the ribs of mammals and lizards are used to help ventilate the lungs," Lyson says. "If you incorporate your ribs into a protective shell, then you have to find a new way to breathe!" Turtles have done just that, with the help of a muscular sling.

Until recently, the oldest known fossil turtles, dating back about 215 million years, had fully developed shells, making it hard to see the sequence of evolutionary events that produced them. That changed in 2008 with the discovery of Chinese Odontochelys semitestacea, a reptile about 220 million years old, which had a fully developed plastron—the belly side of the shell—but only a partial carapace on its back.

Eunotosaurus takes the turtle and its shell back another 40 million years or so. It had nine broadened ribs found only in turtles. And like turtles, it lacked the intercostal muscles running between its ribs. But Eunotosaurus didn't have other features common to Odontochelys and turtles, including broad spines on their vertebrae.

Lyson says he and his colleagues now plan to investigate various other aspects of turtles' respiratory systems, which allow them to manage with their ribs locked up into a protective outer shell. "It is clear that this novel lung ventilation mechanism evolved in tandem with the origin of the turtle shell," he says.

How the turtles got their shells 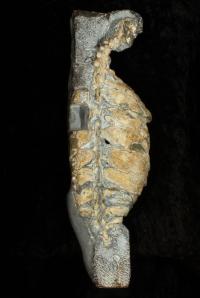 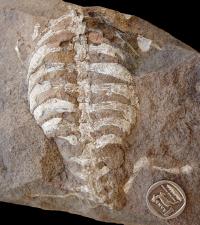