Astronomers have combined a natural gravitational lens and a sophisticated telescope array to get the sharpest view ever of "star factories" in a galaxy over 10 billion light-years from Earth. They found that the distant galaxy, known as SMM J2135-0102, is making new stars 250 times faster than our Galaxy, the Milky Way.

"To a layperson, our images appear fuzzy, but to us, they show the exquisite detail of a Faberge egg," said Steven Longmore of the Harvard-Smithsonian Center for Astrophysics (CfA). Longmore is an author of the paper describing these findings, which was published in the March 21st Nature online.

Due to the time it takes light to travel to us, we see the galaxy as it existed just 3 billion years after the Big Bang. It was Milky Way-sized at the time. If we could see it today, 10 billion years later, it would have grown into a giant elliptical galaxy much more massive than our own.

"This galaxy is like a teenager going through a growth spurt," said Mark Swinbank of Durham University, lead author on the paper. "If you could see it today as an 'adult,' you'd find the galactic equivalent of Yao Ming the basketball player."

From our point of view, SMM J2135-0102 is located behind a massive cluster of nearby galaxies. The cluster's gravity acts as a lens to magnify the more distant galaxy by a factor of 16 in both apparent size and brightness, bringing otherwise imperceptible details to light.

The galaxy, while heavily obscured by dust at visible wavelengths, emits prodigious amounts of light at submillimeter wavelengths (close to the radio region of the spectrum). Indeed, it is the brightest known submillimeter galaxy, making it a natural target for the Submillimeter Array (SMA).

The SMA is an 8-element interferometer operating in the wavelength range of 0.3 to 2 millimeters, located atop Mauna Kea in Hawaii. Combined with the natural magnification of the gravitational lens, the array provided extremely high resolution observations - equivalent to using a telescope in Boston to spot a dime in Washington DC. This yielded a level of detail for a galaxy 10 billion light-years away comparable to the best observations of nearby starburst galaxies (which also show high rates of star formation).

Because of the obscuring dust, the galaxy's distance could not be determined by observations of visible light. For that task, the astronomers turned to a unique instrument, called the "Zpectrometer," on the National Science Foundation's Robert C. Byrd Green Bank Telescope. This instrument was able to determine the galaxy's distance by measuring radio emission from carbon monoxide molecules. The precise distance measurement allowed the scientists to determine "the exact effect that gravitational lensing would have on the galaxy, and therefore exactly how the galaxy would look in the absence of lensing," according to Andrew Baker, of Rutgers University.

"We don't fully understand why the stars are forming so rapidly, but our result suggests that stars formed much more efficiently in the early universe than they do today," said Swinbank.

Their results provide new insight into a critical time during the Universe's history. SMM J2135-0102 is seen at the epoch when the majority of all stars were born, and therefore when many of the properties of nearby galaxies were defined. By studying it and other distant galaxies in the young Universe, astronomers hope to learn about the history of the Milky Way and other nearby galaxies.

Future surveys should identify more targets for study by the SMA and next-generation telescopes such as the Atacama Large Millimeter Array.

"That will allow us to test exactly how generic our results are: Is the star formation occurring within galaxies in the early Universe always so vigorous? Or are we catching this particular galaxy at a very special time?" said Longmore.

Astronomers get sharpest view ever of star factories in distant universe 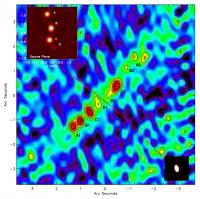