Diversification in the sourcing of food into cities can go a long way to tempering "food shock" -- a sudden drop in food supply due to unforeseen events, according to a team of researchers from Penn State and Northern Arizona University, who developed a statistical risk model linking supply chain diversity to the probability of a city experiencing food shocks.

"The model is simple, operationally useful and hazard-agnostic," the researchers report today (July 8) in Nature. "Using this method cities can improve their resistance to food supply shocks with policies that increase the food supply chain diversity."

The researchers investigated four types of food -- crops, live animals, feed and meat -- over a four-year period from 2012 to 2015 when there were droughts and production shocks in the Great Plains and the western U.S.

"Cities fundamentally depend on other regions for the provision of food and other basic resources," said Alfonso Mejia, associate professor of civil and environmental engineering, Penn State. "We looked at food because it interconnects with other critical regional systems -- water and energy -- and food production is inherently linked to climate variability and change. We wanted to apply basic lessons from the natural world -- biodiverse ecosystems are more resistant to shocks, learned through millennia of adapting to disruption of all kinds -- to our human food systems."

"If a city's food sources are mainly from regions nearby, then its supply chain is not going to be very diverse," said Michael Gomez, doctoral candidate in civil engineering, Penn State. "It's not just distance though, there are other factors that impact diversity."

Some of the variables important to food shock resilience include location, climate, supply network characteristics and level of urbanization. If all a city's beef came from Texas during the drought, for example, then that city would have experienced a food shock with respect to beef during that time.

"There are a number of things that will have a ripple effect on the food supply chain," said Gomez. "Drought, heatwaves, flooding, cyberattacks, global pandemics."

Originally, the available food trade data covered 70 cities including New York and Los Angeles, but Gomez expanded their database to include information on all 284 designated metropolitan areas in the U.S., making their results more robust.

Cities can run into problems with supply chain diversity because they source products from few sources, from locations with similar climates, or from limited geographic areas, among other things, according to the researchers.

The researchers used a traditional engineering approach to look at cities' food supplies. They took the framework of risk analysis of 100-year floods and applied that to food shocks and diversity.

"The idea was to provide cities with an operational way for quantifying resilience and, ultimately, supporting action that can boost resilience through supply chain diversity," said Mejia. "In principle, with our approach, a city can figure out what their supply chain diversity is and what protection against food shock they have. If they decide there is not enough protection, then they can figure out, based in part on other cities' experience, how much diversity in the food chain they need to offer sufficient protection."

Food shocks can cause small variations in the price of food in the supermarket. According to Gomez, populations below the poverty line are the ones most impacted by these increases. However, he notes that designing policies that foster supply chain diversity is a major coordination challenge for cities and other actors involved in the food supply chain.

"But cities could also work together with government at different levels to increase resilience against food supply chain disruptions," said Mejia. "There are several U.S. government programs that relate to food -- the breakfast, lunch, afterschool and nutrition assistance programs. These programs may offer an untapped opportunity for diversifying supply chains and building resilience."

Others working on this project include Benjamin L. Ruddell, director and professor, School of Informatics, Computing, and Cyber Systems; and Richard R. Rushforth, assistant research professor of computing and cyber systems, both at Northern Arizona University.

The National Science Foundation supported this work. Additional data visualization for this research and the project that supported it is at fewsion.us/few-view-3/. 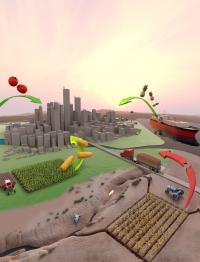