Naked mole rats (Heterocephalus glaber) live in a 'hive' society with one reproducing queen and between one and three reproducing males. The rest of the mole rats in the colony are workers either defending the burrow or finding food – not an easy task when you are virtually blind and all the tunnels smell of mole rat. New research published in BioMed Central's open access journal BMC Evolutionary Biology shows that mole rat sperm has become simple and degenerate, probably due to 'orthogenic' (straight line) evolution.

Dubbed 'sabre-toothed sausages' these burrowing mammals have several weird attributes. They are unable to feel pain in their skin, or regulate their body temperature properly, and for such a small animal they live exceptionally long lives – more than 20 years. They can move backwards as fast as forwards – a neat trick when you live in tunnels, and, like ants, the mole rats recognise their colony by a group smell.

Researchers from South Africa examined the sperm of naked mole rats originating from Kenya. They used males from three different social strata: breeding males, subordinate workers, and 'disperser' males which, although they never consorted or bred with their queen, would attempt to mate with unrelated females.

There was no discernable difference in the sperm from any of the three groups of males, with only 1-15% of the sperm able to swim at all and only 1% of these active sperm being fast swimmers.

The sperm in all cases would be considered abnormal for any other mammal. The sperm head is irregular, often lobular, and the chromatin within the nucleus is dispersed. The neck is poorly developed and the sperm have the smallest mid-piece of any known mammal, with randomly arranged mitochondria. The most degenerate feature of naked mole rat sperm is the tail which is missing the fibrous covering thought to be essential for swimming through the female reproductive tract.

Prof Gerhard van der Horst from University of the Western Cape explained, "Once the queen has picked her consort(s) she keeps the other females and males subordinate by using physical aggression. It seems that the resultant lack of competition between breeding males for the colony queen contributed to an overall decrease in sperm 'fitness'. Surprisingly, despite the low motility and dismal features of their sperm, these naked mole-rat males are fertile and fathered a number of healthy offspring per litter. We are very excited about our results because this would be the first example of degenerate orthogenesis occurring at a cellular level."

Article citation and URL available on request at press@biomedcentral.com on the day of publication.

2. BMC Evolutionary Biology is an Open Access, peer-reviewed online journal that considers articles on all aspects of molecular and non-molecular evolution of all organisms, as well as phylogenetics and palaeontology.

3. BioMed Central (http://www.biomedcentral.com/) is an STM (Science, Technology and Medicine) publisher which has pioneered the open access publishing model. All peer-reviewed research articles published by BioMed Central are made immediately and freely accessible online, and are licensed to allow redistribution and reuse. BioMed Central is part of Springer Science+Business Media, a leading global publisher in the STM sector. 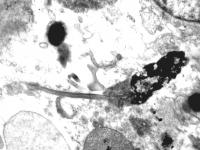