The University of Chicago's Center for Astrophysical Thermonuclear Flashes will perform the world's most advanced simulations of exploding white dwarf stars with an allocation of 2.5 million hours of processing time on the U.S. Department of Energy's high-performance computers. The simulations will be made possible by a DOE award called INCITE (Innovative and Novel Computation Impact on Theory and Experiment), announced today in Washington, D.C.

"Astrophysics is one of the leading areas that is pushing the development of the most powerful, capable computers in the world," said Flash Center Director Don Lamb, the University's Louis Block Professor in Astronomy & Astrophysics.

The computing-time allocation will make possible computer simulations that could help scientists tackle the major question vexing cosmologists today: what is the nature of dark energy, a mysterious force that dominates the universe. Certain aspects of the simulations may also help scientists ensure the reliability of the nation's nuclear stockpile.

The physical processes that Flash Center scientists simulate in exploding stars--supernovae--overlap significantly with the physical processes of concern to the DOE's Stockpile Stewardship Program. In compliance with the Comprehensive Test Ban Treaty, the program seeks to ensure the U.S. nuclear deterrent by integrating computer simulations, experiments and past nuclear test data instead of actual detonations.

"The simulations that we're doing are similar in complexity to Stockpile Stewardship Program simulations," Lamb said.

For this reason, the Advanced Simulation and Computing program of the DOE's National Nuclear Security Administration has supported the Flash Center with funds and computing time for the past nine years in its Academic Strategic Alliance Program.

"The goal is to use the Flash Center supernova problem to drive broadly useful advances in simulation technology," Lamb said. With the INCITE computer program itself centered at a DOE Office of Science Laboratory, the award serves as an example of two DOE divisions working synergistically to advance the nation's scientific and security agendas, he said.

The Flash Center specializes in simulations of white dwarf stars. These stars have shrunk to the size of the Earth after having burned most or all of their nuclear fuel. When they explode, astrophysicists refer to them as type Ia supernovae. These supernovae shine so brightly that astrophysicists use them to measure distance in the universe and to study the nature of dark energy.

The discovery of dark energy first made news in 1998, when two groups of scientists who study exploding stars announced that their measurements indicated the existence of a mysterious force that works against gravity and seems to be accelerating the expansion of the universe. Scientists have identified understanding the properties of dark energy as a science priority. A better understanding of type Ia supernovae also will help advance dark energy research, Lamb said.

Astrophysicists are striving to determine which of four possible processes trigger these supernovae. Different processes will produce different characteristics that astronomers can observe telescopically to help verify their theories. "Our goal in doing these simulations is to pin down the explosion mechanism," Lamb said.

During the next year, the Flash Center team will focus on what it considers the most promising of the four theories, a process they call the gravitationally confined detonation mechanism. Flash Center scientists proposed the existence of this process based on their previous simulations.

In this process, flames ignite at one or a few confined points off-center from the core of the star. A hot bubble forms, grows rapidly, breaks through the surface, then spreads over the entire surface of the star at high velocity. The flame collides with itself at the opposite end of the star, compressing unburned material in the surface layers to high densities and pressures and detonates.

There are only 8,760 hours in a year, but the Flash Center team will use all 2.5 million hours of its computing allocation by early January 2008 in doing these simulations by harnessing the power of parallel computing. With the INCITE award, the Flash Center will have the continuous use of 6,000 processors for nearly two and a half weeks on the Seaborg supercomputer at Lawrence Berkeley National Laboratory in California.

The Flash Center's Robert Fisher compared parallel computing to a high-tech horse-drawn chariot. "A rider on a single horse can plod along using the power of only that horse. However, by hitching many horses to a chariot, a charioteer can efficiently combine the power of many horses," said Fisher, a Research Scientist at the Flash Center.

Successfully executing these lengthy, computationally intensive simulations will require untold hours of fine-tuning the hardware, the operating system, the software coding and other components of the process by DOE's computer experts and Lamb's team. "There's a reason why these simulations are referred to as 'hero calculations,'" Lamb said.

For images of a Flash Center supernovae simulation, see: http://flash.uchicago.edu/~jbgallag/news/4km_wd_def/. 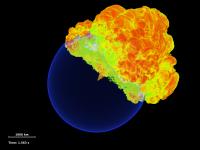 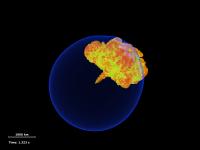