Balance is key to many physiological functions and it is especially true in the production and regulation of proteins. A balance of proteins in cells helps maintain health, but an unhealthy clumping can lead to a variety of diseases, including those connected to aging such as Alzheimer's.

Researchers at the University of California San Diego studying how animals respond to infections have found a new pathway that may help in tolerating stressors that damage proteins.

Naming the pathway the Intracellular Pathogen Response or "IPR," the scientists say it is a newly discovered way for animals to cope with certain types of stress and attacks, including heat shock.

The study, published Nov. 2 in Current Biology, was led by Kirthi Reddy in the lab of Emily Troemel, a professor in the Cell and Developmental Biology Section in UC San Diego's Division of Biological Sciences.

The researchers studied how roundworms (C. elegans) regulate expression of genes that are turned on by infection with microsporidia, which are natural intracellular pathogens of worms as well as humans.

"The species of microsporidia we study only grows inside the intestine of the worm--it can't grow outside," said Troemel. "C. elegans has a transparent body plan, which facilitates watching microsporidia, how it grows and what it does to host cells. Most recently we've focused on how C. elegans turns on IPR genes in response to microsporidia and heat stress."

During the study, genetic screening revealed the identity of pals-22, a gene used by roundworms to regulate IPR pathway gene expression. Roundworm mutants of pals-22 always have IPR genes on, which causes increased tolerance of heat shock and other types of stress. These IPR effects appear to be independent of previously described pathways. The researchers say the discovery has implications for many diseases related to protein accumulation since comparable genes can often be linked in humans.

The IPR discovery is recent enough that the researchers still need more analysis to understand how it actually works. Initial ideas are that the IPR helps mark damaged proteins inside cells.

"At this point we hypothesize that the IPR pathway involves putting tags on proteins to send them to the proteasome, which is the cellular trash can," said Troemel. "We are actively testing this model with the goal that we will decipher a new way that animals can cope with stress." 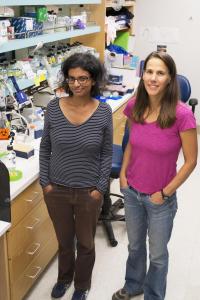