SAN FRANCISCO -- Upon victory, an athlete's initial and instinctive reaction is one that displays dominance over his or her opponent, according to a new study published today in the journal Motivation and Emotion.

Such body language, known as a "dominance threat display" and labeled as "triumph" in other studies, was observed in winners of Olympic and Paralympic judo matches. It appears to be innate and stems from an evolutionary need to establish order and hierarchy in society, said San Francisco State University Professor of Psychology David Matsumoto, who co-authored the study with Hyisung Hwang, an adjunct faculty member in psychology at SF State.

In a separate study published in November, Hwang and Matsumoto also found that an athlete's culture affects the intensity with which he or she displays this body language.

In Matsumoto and Hwang's previous research, observers labeled the body language of athletes seen in victorious poses as "triumph" and established triumph as potentially being a separate expression from pride, which requires more cognitive thinking and reflection. The new study, however, is the first to ask whether expressions of triumph are the immediate reaction of an athlete following victory.

To answer that question, Hwang and Matsumoto looked at the first body motion made by an athlete upon learning he or she was victorious, determined whether that action was among those considered to constitute "triumph," and rated the intensity of the action on a five-point scale. Actions considered triumphant included raising the arms above the shoulders, pushing the chest out, tilting the head back and smiling. They were observed in winning athletes from all cultural backgrounds and even in blind Paralympic athletes, suggesting the behavior is biologically innate.

"It is a very quick, immediate, universal expression that is produced by many different people, in many cultures, immediately after winning their combat," Matsumoto said. "Many animals seem to have a dominant threat display that involves making their body look larger."

In their other study, Hwang and Matsumoto compared the intensity of an athlete's expressions of triumph with his or her culture's "power distance" (PD), a measurement that represents the degree to which a culture encourages or discourages power, status and hierarchical differences among groups. They found that athletes from cultures with high PD produced such body language more than those from cultures with low PD.

Countries with high PD include Malaysia, Slovakia and Romania, while countries with low PD include Israel, Austria and Finland. The United States and United Kingdom fall in the middle of the PD spectrum, along with countries such as Hungary, Iran and Italy.

The results make sense, Matsumoto said, given the importance of displaying dominance to establishing status and hierarchy within a group so that the group operates efficiently. Countries that place a greater emphasis on hierarchy have a greater need for body language that helps establish power and status. But such actions can be seen in many different types of groups, he added.

Additional research is needed to see if the results can be replicated across other contexts, Matsumoto said. He is also hoping to further study when these types of behaviors occur and what triggers them, as well as collect additional data to bolster the theory that triumph is a separate expression from pride.

"Dominance threat display for victory and achievement in competition context" was published online Jan. 10 in the journal Motivation and Emotion. "Cultural Differences in Victory Signals of Triumph" was published in the Nov. 20 issue of the journal Cross Cultural Research. Both papers were co-authored by Hyisung C. Hwang and San Francisco State University Professor of Psychology David Matsumoto.

SF State is the only master's-level public university serving the counties of San Francisco, San Mateo and Marin. The University enrolls nearly 30,000 students each year and offers nationally acclaimed programs in a range of fields -- from creative writing, cinema and biology to history, broadcast and electronic communication arts, theatre arts and ethnic studies. The University's more than 212,000 graduates have contributed to the economic, cultural and civic fabric of San Francisco and beyond. 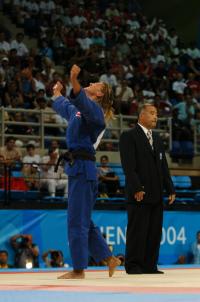