As Tropical Cyclone Tatiana was developing in the Coral Sea, east of Queensland, Australia, NASA's RapidScat measured the surface winds in the intensifying tropical cyclone.

RapidScat saw strongest sustained winds near 18 meters per second (40 mph/64 kph) in the western and southern sides of developing Tropical Cyclone Tatiana on Feb. 10. RapidScat flies aboard the International Space Station and can measure winds on the ocean's surface. Forecasters are able to use RapidScat data to pinpoint the strongest winds within a storm, as they are not always equally distributed.

The Australian Bureau of Meteorology noted that Tropical cyclone Tatiana is situated well offshore and poses no immediate threat to the Queensland coast.

The Joint Typhoon Warning Center forecast calls for Taitana to move southeast and intensify to 55 knots (63.2 mph/101.9 kph). It is forecast to pass far to the west of New Caledonia, weaken and dissipate by February 15. 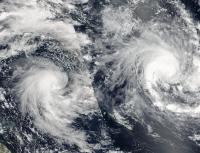