Forest fires were long thought to have a negative impact on the environment and on biodiversity, but in recent decades the importance of fire in sustaining and even enhancing natural systems has been demonstrated by researchers and increasingly embraced by land managers.

Now, a team of scientists has shown that mixed-severity fires - those that are on the whole not too hot, not too cold, but just right - can lead to increased biodiversity of birds in California forests over time.

Fires in the U.S. are on average getting bigger and more severe - and are expected to continue to do so under future scenarios of climate change. The researchers suggest that forest managers should prioritize managing forests so that they are more likely to burn at a mixture of intensities: as the study's lead author Morgan Tingley puts it, "Goldilocks fires," or those that have large patches of both heavily-burned and lightly-burned forest.

"Due to climate change and a buildup of fuels from historical fire suppression, fires appear to be increasingly burning large swaths of forest at high severity, and that's not good for biodiversity," says Tingley, assistant professor of ecology and evolutionary biology at the University of Connecticut.

"Mixed-severity fire is more likely to occur when forests with a natural level of structural diversity burn, resulting in a mosaic of patches of different burn severities. To promote biodiversity, forests with a diversity of structures and ages should be a goal of management practices."

Tingley and colleagues from The Institute for Bird Populations, the Cornell Lab of Ornithology, and the U.S. Forest Service visited more than 100 fire sites in California's Sierra Nevada over the course of six years and assessed them at various stages up to 10 years after they had burned.

They surveyed bird populations and compared their findings with satellite-derived images that measure burn severity, along with environmental variables like elevation, latitude and time since the area burned. Using birds as a proxy for biodiversity makes sense, says Tingley, because birds can respond relatively quickly to their environment and are important in establishing post-fire niches that other animals can fill.

"Certain types of birds that colonize recently burned forests help make the burned areas more hospitable for other species," says Rodney Siegel, Executive Director of The Institute for Bird Populations and a co-author on the study. "Woodpeckers are rapid colonizers, and they excavate tree cavities that are subsequently used by other animals, including other birds or even mammals."

The researchers' data showed that areas with a greater mixture of severities - termed pyrodiversity - had more diverse bird communities, an effect that became more pronounced with each year that passed after fire. Tingley says this not only shows the persistent and beneficial effects that fires can have on landscapes, but emphasizes the need to study burned areas long after the ashes have cooled.

This role of time in interacting with fire severity to create and maintain biodiversity has not been shown previously, he says.

"Our results show there is much to be learned by studying ecological dynamics following the immediate aftermath of a fire," notes Tingley. "Fires that burn at different severities can create different habitat patches that host increasingly different bird communities over time. This can have the positive effect of infusing diversity into areas that were once homogenous."

He adds that fire has positive impacts on the environment, but climate change may be making fires less beneficial over time.

"We believe there are actions forest managers can take to promote pyrodiversity, and by extension biodiversity. Testing the efficacy of some of those actions is an important next step in this work. "

The study appears Oct. 5 in Proceedings of the Royal Society B. 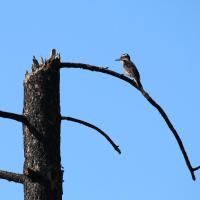 A Hairy Woodpecker Returns to an Area Damaged by Fire