NASA's Aqua satellite got "eyeballed" from Cyclone Claudia in the Southern Indian Ocean when two instruments captured the storm's eye in infrared and visible light. Satellite data indicates that Claudia's eye is about 10 nautical miles wide.

During that same overpass the Moderate Resolution Imaging Spectroradiometer (MODIS) instrument also aboard Aqua captured a stunning visible image of Claudia that clearly showed an eye.

Claudia became a cyclone over the weekend of Dec. 8 and 9. On Dec. 8, Tropical Cyclone Claudia's winds increased to cyclone strength. During the early morning hours on Dec. 8 NASA's Tropical Rainfall Measuring Mission (TRMM) satellite passed overhead and identified that the heaviest rainfall lay south of the eye of the storm. Rain in that quadrant of the storm was falling at a rate of 30 millimeters (1.2 inches) per hour.

On Sat. Dec. 8, Claudia's maximum sustained winds were near 100 knots (115 mph/185 kph). Claudia was a category 3 cyclone and considered a major storm. It was centered near 14.7 south latitude and 74.6 east longitude, or about 450 nautical miles south-southeast of Diego Garcia. Claudia was moving to the southwest at 4 knots (5 mph).

Claudia is moving southward along the western edge of ridge (elongated area) of high pressure, and is expected to speed up and turn toward the southeast according to the forecasters at the Joint Typhoon Warning Center.

Claudia may not be giving any NASA satellite the "eye" after another day or two when it runs into cool waters and an area of stronger vertical wind shear.

NASA gets eyeballed from Cyclone Claudia 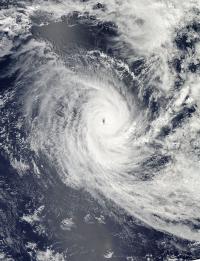