Researchers have identified a subgroup of neurons in the mouse brain that, upon activation, immediately prompt binge-like eating. Furthermore, repeated stimulation of these neurons over time caused the mice to gain weight. The zona incerta (ZI) is a relatively understudied part of the brain. Intriguingly, patients receiving deep brain stimulation of the subthalamus, which includes the ZI, for the treatment of movement disorders can exhibit characteristics of binge eating. To explore this phenomenon in greater detail, Xiaobing Zhang and Anthony N. van den Pol optogenetically labelled GABA neurons in the ZIs of mice. They found that stimulating ZI GABA neurons with axons extending into the paraventricular thalamus (PVT) prompted immediate binge-like eating, just two to three seconds after stimulation. Within ten minutes of continuous ZI GABA stimulation, mice rapidly consumed 35% of their daily high-fat food store, meant to be eaten over a 24-hour period. The researchers also found that ghrelin, a hormone that signals a reduced energy state in the gut, excited ZI GABA neurons. Upon stimulating the subgroup of ZI neurons for five minutes every three hours over a period of two weeks, the mice significantly increased their food intake, and gained weight. Yet, once photostimulation was over, the mice showed a significantly reduced food intake compared with that of controls. Lastly, the authors found that stimulation of excitatory axons from the parasubthalamic nucleus to PVT or direct stimulation of glutamate neurons in the PVT reduced food intake.

A flip switch for binge-eating? 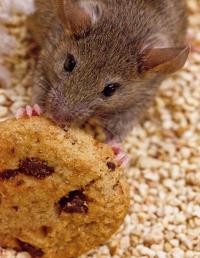