NASA's GPM satellite gathered rainfall rate and cloud height data on the newly developed tropical low pressure area designated System 92S in the Indian Ocean off Australia's northwestern coast. The low pressure area is expected to become a depression in the next day or two, according to the Australian Bureau of Meteorology.

The Global Precipitation Measurement Mission or GPM core observatory satellite flew over the area of disturbed weather on Jan. 27, 2016 at 0946 UTC (4:46 a.m. EST). GPM is managed by both NASA and the Japan Aerospace Exploration Agency.

According to the Australian Bureau of Meteorology expect the storm to reach category 2 strength when it crosses the Pilbara coast Saturday morning, Jan. 30 (local Perth time). Area in the warning zone range from Bidyadanga to Mardie and the adjacent inland parts to Marble Bar and Pannawonica.

On Jan. 26, 2016 at 0617 UTC (1:17 a.m. EST), the Atmospheric Infrared Siunder or AIRS instrument aboard NASA's Aqua satellite saw strongest storms with coldest cloud top temperatures near -63F/-53C around and east of the center.

The low is gradually strengthening and is forecast to become a tropical cyclone during Friday as it tracks south toward the Pilbara coast. It is forecast to reach category 2 intensity when it makes landfall on Saturday morning between Pardoo and Karratha, including near Port Hedland.

ABM also warnred that the tides between Pardoo and Karratha are likely to rise above the normal high tide mark with very rough seas and possible flooding of low-lying coastal areas east of the crossing point. A Flood Watch is current for the Pilbara and a Flood Warning is current for the De Grey River Catchment.

For updated forecasts from the Australian Bureau of Meteorology, visit: http://www.bom.gov.au/. 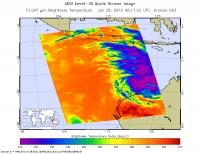