Zoologists from Trinity College Dublin, working in tropical Southeast Asia, have uncovered a modern-day example of rapid evolution in action.

The zoologists have discovered that male and female Sulawesi Babblers (Pellorneum celebense, a species of bird) have evolved to attain different sizes on small islands, and in quick-fire time. They believe this is most likely due to evolutionary pressure favouring such "dimorphism" because the birds are able to reduce competition with each other by feeding on different, scarce resources.

The research, completed with the support of the Irish Research Council and collaborators in Universitas Halu Oleo, is published today in the journal Biotropica. The research shows that the males of the Sulawesi Babbler grow to be up to 15% larger than the females - with this difference particularly marked on the smaller islands.

Fionn Ó Marcaigh, first author on the paper and a PhD Candidate in Trinity's School of Natural Sciences, said:

"Tropical regions are home to more species of plants and animals than anywhere else, but many of these remain poorly understood even as they face imminent extinction. This is especially true of relatively non-descript species like the babblers, which are shy birds that feed in dense bushes all over the islands of Southeast Asia.

"Because male and female babblers have the same dull brown plumage, unlike familiar birds such as pheasants or peacocks, scientists previously thought that they did not show sexual dimorphism. Our discovery proves this wrong and provides another timely reminder that we have so much more to learn about tropical species if we are to understand how they are evolving on all the world's marvellous and diverse islands.

"We can't protect them if we don't understand them."

The kind of sexual dimorphism in size displayed by the babblers is important because it enables the males and females to fill different "niches" in the ecosystem.

There is an evolutionary theory stating that dimorphic species are likely to become more strongly dimorphic on islands than they are on the mainland, as it prevents them having to compete for scarcer resources. However, this is usually seen on very isolated islands where there has been ample time for populations to evolve separately.

"Our research is significant for showing the same process to have occurred on much younger islands, which were connected to the mainland by land-bridges only 30,000 years ago. This means that the difference in sexual dimorphism between mainland and island birds must have evolved quite rapidly, showing its importance for the ecology of the species."

A copy of the paper is available on request. It can also be viewed at https://bit.ly/3nxBQx0.

For more information on the discovery, you can read this blog post: http://www.ecoevoblog.com/2020/10/07/babbler-dimorphism/ 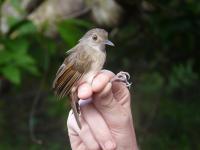