Raising maggots may not sound glamorous, but that doesn't mean it's not important. In the latest issue of the Journal of Insect Science, Paola Lahuatte, a junior researcher at the Charles Darwin Foundation, and her colleagues reveal how they used chicken blood to rear the larvae of the parasitic fly Philornis downsi in the lab. This protocol may be the first to effectively rear an avian blood-feeding fly from egg to adult in the absence of its host. More importantly, it may prove to be a crucial tool in the fight to save endemic birds in the Galapagos islands, including the critically endangered mangrove finch.

Adult Philornis downsi feed on fruit, but as larvae they parasitize baby birds, usually small songbirds. The female fly lays its eggs in bird nests. Once hatched, first-instar larvae crawl into the nostrils of the nestling birds, where they feed on both blood and tissue. Larger, second-instar larvae leave the confined space of the nostrils and hide out in nest material during the day. They emerge at night to continue feeding on the chicks.

Philornis downsi infestation takes a serious toll on nestlings. In some cases, all of the young in an infested nest are killed by the parasites.

Philornis downsi is not native to the Galapagos Islands. The species was likely introduced accidentally in the 1960s via imported fruit and has since wreaked havoc on the islands' endemic bird populations. Parasitism is the leading cause of nestling mortality for at least one species of Darwin's finch, and some believe it is the main cause of decline of landbirds in the Galapagos Islands.

One method that has been proposed to control Philornis downsi is the "sterile insect technique" or SIT. This method produces large numbers of artificially sterilized insects (usually males) that are released into the wild population. Females that mate with sterile males produce no offspring, thus reducing the size of the next generation. SIT has been used to successfully eradicate populations of screwworm flies and has been useful in the control of certain species of fruit fly.

However, the ability to rear large numbers of flies in the laboratory is essential for this technique, which is difficult with Philornis downsi beause it would require raising large numbers of songbirds for them to feed on. Keeping captive songbirds in the lab to play host to these lethal parasites would not only be cruel, but also logistically difficult.

The chicken-blood diet developed by Lahuatte and her colleagues may be the first major step in making SIT control of Philornis downsi possible because it would make possible the rearing of large numbers of flies without songbird hosts.

The Journal of Insect Science is published by the Entomological Society of America, the largest organization in the world serving the professional and scientific needs of entomologists and people in related disciplines. Founded in 1889, ESA today has more than 7,000 members affiliated with educational institutions, health agencies, private industry, and government. Members are researchers, teachers, extension service personnel, administrators, marketing representatives, research technicians, consultants, students, and hobbyists. For more information, visit http://www.entsoc.org. 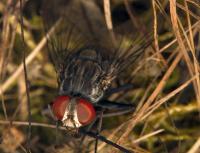