Archaeologists from The Australian National University (ANU) have discovered a rare child burial dating back 8,000 years on Alor Island, Indonesia.

The one-of-its-kind burial for the region is from the early mid-Holocene and gives important insights into burial practices of the time.

Lead researcher Dr Sofia Samper Carro said the child, aged between four and eight, was laid to rest with some kind of ceremony.

"Ochre pigment was applied to the cheeks and forehead and an ochre-coloured cobble stone was placed under the child's head when they were buried," she said.

"Child burials are very rare and this complete burial is the only one from this time period," Dr Samper Carro said.

"From 3,000 years ago to modern times, we start seeing more child burials and these are very well studied. But, with nothing from the early Holocene period, we just don't know how people of this era treated their dead children. This find will change that."

Notably, the child's arm and leg bones were removed before interment and disposed of elsewhere.

"The lack of long bones is a practice that has been documented in several other burials from a similar time period in Java, Borneo and Flores, but this is the first time we have seen it in a child's burial," Dr Samper Carro said.

"We don't know why long bone removal was practised, but it's likely some aspect of the belief system of the people who lived at this time."

The estimated age of the child based on teeth correspond to a six- to eight-year-old child, but the skeleton is that of a four- to five-year-old child.

"We want to do some further paleo-health research to find out if this smaller skeleton is related to diet or the environment or possibly to being genetically isolated on an island," Dr Samper Carro said.

"My earlier work from Alor showed adult skulls were also small. These hunter-gatherers had a mainly marine diet and there is evidence to suggest protein saturation from a single food source can cause symptoms of mal-nourishment, which affects growth. However, they could have been eating other terrestrial resources such as tubers.

"By comparing other adult burials we have found from the same time period with this child burial in a future project, we hope to build a chronology and general view of burial practices in this region from between 12,000 to 7,000 years ago which at the moment is still scant." 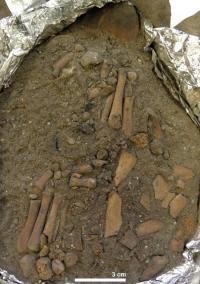 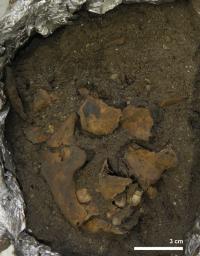