University of British Columbia researchers have found a new way to make state-of-the-art materials for energy storage using a cheap lamp from the hardware store.

The researchers wanted to find a better way to make coatings that can be painted onto surfaces to conduct electricity or convert electricity into hydrogen fuels. Typically these coatings are made in more extreme conditions with expensive tools and materials. But the researchers developed a technique that allows them to use a consumer grade heat lamp to get the same results. Once the solution was painted onto a surface and heated up, it transformed into a catalytic coating.

These coatings can be used in a range of technologies, such as flexible electronic devices or to convert electricity into hydrogen fuels. The discovery, published today in the new open access journal Science Advances, could have implications for consumer electronics and clean energy technologies.

"Solar farms and wind turbines don't provide a constant supply of energy," says study co-author Curtis Berlinguette, an associate professor in UBC's Departments of Chemistry and Chemical and Biological Engineering. "Storing electrical energy produced during times of low demand as hydrogen fuels enables that electricity to be used later during peaks of higher demand. The catalyst coatings we can now produce more easily could help make this process cheaper and more efficient."

The researcher's new technique may also help reduce the fabrication costs of making catalyst-coated electrodes in commercial applications, such as electrolyzers.

"The technique is scalable and amenable to large-scale manufacturing," says Danielle Salvatore, a chemical engineering graduate student and the paper's lead author.

"We can create these materials on any surface without an expensive precursor," says Berlinguette, explaining that these findings build on earlier work of using more expensive UV light to create catalytic films . 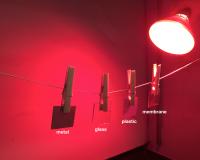