The tiny beetle Triamyxa coprolithica is the first-ever insect to be described from fossil faeces. The animal the researchers have to thank for the excellent preservation was probably the dinosaur ancestor Silesaurus opolensis, which 230 million years ago ingested the small beetle in large numbers.

In a recently published study in Current Biology, vertebrate palaeontologists from Uppsala University and entomologists from National Sun Yat-sen University (Taiwan), Friedrich-Schiller-Universität Jena (Germany), and Universidad de Guadalajara (Mexico) used synchrotron microtomography to 3D-reconstruct the beetles while they were still trapped within the fossilised faecal matter. The coprolite contained abundant beetle body parts, most belonging to the same small species. A few specimens were found nearly complete, with much of the delicate legs and antennae still intact. The well-preserved state of these fossils made it possible to produce a detailed description of the new beetle genus and to compare it with more modern ones. Triamyxa coprolithica represents a previously unknown extinct lineage of the suborder Myxophaga, whose modern representatives are small and live on algae in wet environments.

"We were absolutely amazed by the abundance and fantastic preservation of the beetles in the coprolite fragment. In a way, we must really thank Silesaurus, which likely was the animal that helped us accumulating them," says Martin Qvarnström, researcher at Uppsala University and one of the co-authors of the paper.

Silesaurus opolensis - the probable producer of the coprolite - was a relatively small dinosaur ancestor with an estimated body weight of 15 kilograms that lived in Poland approximately 230 million years ago. In a previous study, the authors assigned coprolites with disarticulated beetle remains to Silesaurus based on the size and shape of the coprolites as well as several anatomical adaptations in the animal. Silesaurus possessed a beak at the tip of its jaws that could have been used to root in the litter and perhaps peck insects off the ground, somewhat like modern birds. But although Silesaurus ingested numerous individuals of Triamyxa coprolithica, the beetle was likely too small to have been the only targeted prey. Instead, Triamyxa likely shared a habitat with larger beetles, which are represented by disarticulated remains in the coprolites, and other prey, which never ended up in the coprolites in a recognisable shape.

"I never thought that we would be able to find out what the Triassic precursor of the dinosaurs ate for dinner," says Grzegorz Nied?wiedzki, palaeontologist at Uppsala University and one of the co-authors of the paper.

The preservation of the beetles in the coprolite is similar to specimens from amber, which normally yield the best-preserved insect fossils. Amber, however, was mainly formed during relatively recent geological time. This study shows that coprolites may be valuable for studying early insect evolution and, at the same time, the diet of extinct vertebrates.

The synchrotron scanning was carried out at the European Synchrotron Radiation Facility (ESRF) in Grenoble. 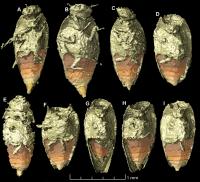