Spiders are traditionally viewed as predators of insects. Zoologists from Switzerland and Australia have now published a study that shows: spiders all over the world also prey on fish. The academic journal PLOS ONE has just published the results.

Although viewed by ecologists as the classical predators of insects, researchers have become increasingly aware that spiders are not exclusively insectivorous. Certain larger-sized species supplement their diet by occasionally catching small fish. This shows a new study by zoologist and spider expert, Martin Nyffeler from the University of Basel, Switzerland and Bradley Pusey from the University of Western Australia. The researchers gathered and documented numerous incidents of spiders predating fish from all around the world.

Fish as a diet supplement

According to their systematic review, spiders from as many as five families have been observed predating on small fish in the wild and three more families contain species that catch fish under laboratory conditions. These so called semi-aquatic spiders typically dwell at the fringes of shallow freshwater streams, ponds or swamps. These spiders, some of which are capable of swimming, diving and walking on the water surface, have powerful neurotoxins and enzymes that enable them to kill and digest fish that often exceed them in size and weight. “The finding of such a large diversity of spiders engaging in fish predation is novel. Our evidence suggests that fish might be an occasional prey item of substantial nutritional importance”, says Martin Nyffeler.

Based on this study, naturally occurring fish predation by spiders has been reported from all continents with the exception of Antarctica. Most incidents have been documented in North America, especially in the wetlands of Florida, where semi-aquatic spiders have often been witnessed catching and eating small freshwater fish such as mosquitofish. In order to catch its prey, the spider will typically anchor its hind legs to a stone or a plant, with its front legs resting on the surface of the water, ready to ambush. The fish will then be dragged to a dry place before the feeding process can begin which usually lasts several hours.

Fish-eating spiders discovered in all parts of the world 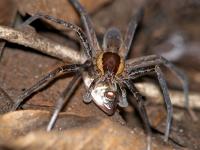