About 25 years ago, researchers discovered the first dinosaur embryos in an enormous nesting ground of titanosaurian dinosaurs that lived about 80 million years ago in a place known as Auca Mahuevo in Patagonia, Argentina. Now, researchers reporting in the journal Current Biology on August 27 describe the first near-intact embryonic skull. The finding adds to our understanding of the development of sauropod dinosaurs, a group characterized by the long neck and tails and small heads perhaps most familiar in the Brontosaurus, and suggests that they may have had specialized facial features as hatchlings that changed as they grew into adults.

"The specimen studied in our paper represents the first 3D preserved embryonic skull of a sauropod sauropodomorph," says Martin Kundrat of the PaleoBioImaging Lab at Pavol Jozef Šafárik University, Slovak Republic. "The most striking feature is head appearance, which implies that hatchlings of giant dinosaurs may differ in where and how they lived in their earliest stages of life. But because it differs in facial anatomy and size from the sauropod embryos of Auca Mahuevo, we cannot rule out that it may represent a new titanosaurian dinosaur."

The new embryonic dinosaur specimen also is from Patagonia, although its precise origin isn't known. That's because the egg was illegally exported from the country and brought to researchers' attention only later. When Terry Manning, a co-author on the study from Arizona, realized the unique preservation and scientific importance of the specimen, he agreed to send this unique fossil back to Argentina for further study. It's now housed with other titanosaurian embryos from Auca Mahuevo under curation of Rodolfo Coria at the Museo Municipal Carmen Funes in Plaza Huincul.

In the new study, Kundrat's team used a new imaging technology called synchrotron microtomography to study the inner structure of bones, teeth, and soft tissues of the embryonic dinosaur. The scans allowed Kundrat and co-author Daniel Snitting, Uppsala University, Sweden, to find hidden details, including tiny teeth preserved deeply in tiny jaw sockets. They also found partly calcified elements of the embryonic braincase and what appear to be the remains of temporal muscles.

The scans allowed the researchers to reconstruct the most plausible appearance of the skull in titanosaurian sauropods before hatching. Those details are useful for taxonomic or developmental comparisons among related dinosaurs.

The findings also suggest that the baby sauropods may have hatched out of the egg with the help of a thickened prominence rather than a boney "egg-tooth." They uncovered evidence as well that the embryonic dinosaurs used calcium derived from the eggshell long before they were ready to hatch.

They report that the titanosaurian hatchlings emerged with a temporary moncerotid (single-horned) face. They also had retracted openings on the nose (nares) and early binocular vision. "We suggest an alternative head appearance for babies of these Patagonian giants," Kundrat says.

The findings suggest that the young sauropods had a specialized head and face that transformed as the young dinosaurs grew and matured into adults. The findings have implications for our understanding of the dinosaurs and how they lived, the researchers say. "Dinosaur eggs are for me like time capsules that bring a message from the ancient time," Kundrat says. "This was the case of our specimen that tells a story about Patagonian giants before they hatched.

"Our study revealed several new aspects about the embryonic life of the largest herbivorous dinosaurs that lived on our planet," he adds. "A horned faced and binocular vision are features quite different from what we expected in titanosaurian dinosaurs."

This work was supported by the European Synchrotron Radiation Facility, Swedish Research Council, the Slovak Research and Development Agency, and the Scientific Grant Agency VEGA of the Ministry of the Education, Science, Research and Sport of the Slovak Republic. 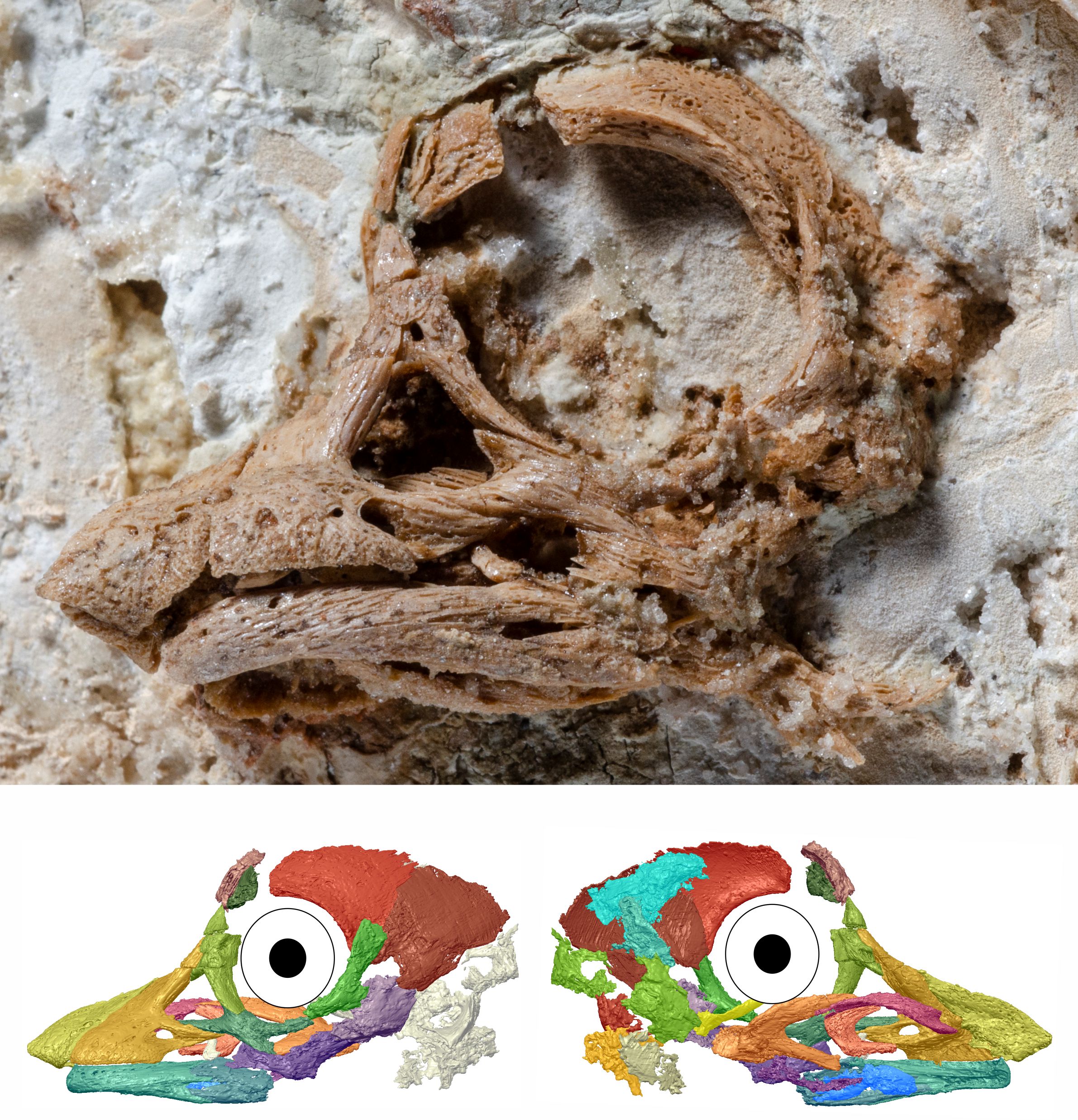 Close up of the Titanosaurian embryonic skull with skull reconstruction