Have you ever seen a horse fly? Maybe you have, but never like this one.

This HorseFly has eight rotors, a wirelessly recharging battery and a mission to deliver merchandise right to your doorstep.

Steve Burns, CEO of AMP, explains the process like this: The HorseFly will be positioned atop a delivery truck, awaiting a package from the driver. When loaded, the HorseFly will scan the barcode on the package, determine the path to the delivery address via GPS and fly away – completely self-guided – to the appropriate destination. Meanwhile, the delivery truck will continue on its rounds. After successful delivery, the HorseFly will zoom back to the truck for its next delivery run and, if needed, a roughly two-minute wireless recharge.

"Our premise with HorseFly is that the HorseFly sticks close to the horse," Burns says. "If required, the HorseFly will wirelessly recharge from the large battery in the WorkHorse truck. The fact that the delivery trucks are sufficiently scattered within almost any region during the day makes for short flights, as opposed to flying from the warehouse for each delivery."

Paul Orkwis, head of UC's Department of Aerospace Engineering and Engineering Mechanics, looks at the HorseFly and sees its potential to be something more.

"If you want to get really far-fetched and look into the future, at something like a flying car, that's possibly what you could be looking at with this," Orkwis says.

The UAV-truck delivery method is an ingeniously simple concept powered by some very complex technology. UC aerospace researchers have developed an experimental capability to capture the dynamic behavior – response to outside forces, such as wind gusts – of the UAV platform.

The researchers use computer models to analyze how a UAV behaves in a dynamic environment, allowing them to develop an autonomous controller and essentially put the UAV on autopilot. Flight tests have shown UC's modeling system to be highly accurate.

The novel, reconfigurable design of the HorseFly UAV is a product of this research, says Kelly Cohen, an associate professor of aerospace engineering and engineering mechanics. Cohen's team is led by his PhD student Wei Wei with support from fellow students Bryan Brown, Nicholas Schwartz, Vince DeChellis and Nathaniel Richards.

"With the HorseFly project, we developed a brand-new aircraft and airframe from scratch, and we built the system with the ability to look into different applications. Now we can build a family of octorotors and find out the best possible configuration," Cohen says. "There is no textbook on multirotor aircraft design. Here we have been pioneering this effort, and we've come up with something successful."

Key to that success and a primary reason AMP teamed with UC has been the researchers' ability to make the HorseFly safe and resilient. In addition to the sophisticated autonomous controller system, the HorseFly will have multiple built-in hardware redundancies (rotors, onboard computers, battery packs). So if, for example, multiple rotors were to fail, the HorseFly and its payload still could be retrieved safely.

"An important part of the HorseFly project is that we make a vehicle that will not drop out of the sky," Burns says. "This is the particular point that UC specializes in and where we are relying on their expertise to help us build such a safe and resilient craft."

Burns also noted that the HorseFly can be supported by human pilots in a flight control center who can access the aircraft's cameras to choose the safest landing spot.

The partnership between UC and AMP was secured through UCRI, an independent nonprofit entity connecting UC experts to industry partners, facilitating commercialization of research and enhancing experiential learning for UC students.

For HorseFly, Burns connected with Orkwis to explain his vision for the project. Then an agreement was developed in a matter of days with help from UCRI CEO David Linger.

"UCRI supports businesses, small or large, that want to access and leverage the university's expertise: faculty, students and labs to collaborate with the firm's researchers," Linger explains. "The partnership with AMP is a great example of how UCRI can facilitate the path to innovation between private industry and university resources."

According to Linger, partnerships between the university and private businesses have traditionally been limited to the co-op program or privately-funded research, and were often complicated and time-intensive to undertake. But because it is an independent, small nonprofit, UCRI can leverage the full expertise of the university while executing with agility and efficiency.

Cohen said working with UCRI has opened new doors for his department.

"AMP came up with a vision, and we made suggestions. Those suggestions were translated into a very quick project, something that would have been impossible without UCRI," Cohen says. "Now, we have the possibility of becoming strategic business partners working with industry, pushing the envelope together as we transition technology as well as business ideas due to our knowledge of the market."

Terms of the agreement called for AMP to receive a working, flight-tested design prototype, and a final report and demonstration. AMP provided funding for minimal overhead costs and tuition support for Wei.

Orkwis credited UCRI for streamlining the process and accommodating student involvement in the project. He says the importance of Wei's role was exemplified at a recent flight demo where Wei piloted the HorseFly for AMP investors – a unique real-world experience that is Cincinnati Smart.

"A lot can be attributed to Wei's own can-do attitude. That's really what it comes down to. If you sit back and say, 'No it can't be done,' then who wants to come and work with you?" Orkwis says.

UC and AMP will continue to develop the HorseFly project in anticipation of new Federal Aviation Administration regulations on commercial use of unmanned aerial vehicles. As of now, limited recreational use of UAVs is permitted in the U.S. but commercial activity is not allowed. New FAA rulings are expected soon and could arrive in 2015.

MORE ABOUT UAV RESEARCH AT UC

Don't Fear the Dawn of the Drones – Someday One Just Might Save Your Life, Thanks to UC Research

University of Cincinnati engineering researchers are finding new and unique approaches to developing autopilots for unmanned aerial vehicles and getting them into the hands of firefighters and other first responders. WATCH a 65-second flight demo.

A system built by University of Cincinnati experts around an unmanned aerial vehicle has faced a real-world test in a West Virginia controlled forest burn, and proved its usefulness.

HorseFly 'octocopter' primed to fly the future to your front door 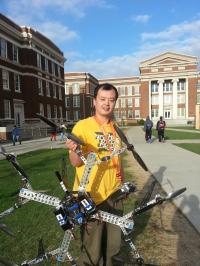 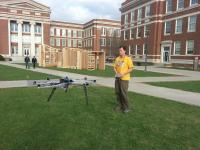