Along with allowing enhanced performance and cost savings for conventional photolithography processes, the new material, called polyset epoxy siloxane (PES), should also enable a new generation of lower-cost, on-chip nanoimprinting lithography technology, according to the researchers.

“With this new material, chip manufacturers will be able to trim several steps from their production and packaging processes, and in turn realize a cost savings,” said Toh-Ming Lu, the R.P. Baker Distinguished Professor of Physics at Rensselaer, who oversaw the study. “PES is cheaper and more reliable.”

Lu’s research was published this week in the Journal of Vacuum Science and Technology B.

The widely adopted technique of photolithography involves using a mix of light and chemicals to generate intricate micro- and nano-scale patterns on tiny areas of silicon. As part of the process, a thin polymer film – called a redistribution layer, and crucial to the effectiveness of device – is deposited onto the silicon wafer, in order to ease the signal propagation delay and to protect the chip from different environmental and mechanical factors.

The new PES material developed by Lu’s group and Polyset Company is one such thin polymer film, and it offers several advantages over the incumbent materials typically used in the semiconductor manufacturing industry. In addition, their new PES material can also be used as a thin polymer film for ultraviolet (UV) on-chip nanoimprinting lithography technology, which is still in the early phases of development. The consistency of using PES in conventional technology, and then continuing to use PES while academia and industry test and gradually migrate to the next generation of devices, should help ease the transition, Lu said.

“Having the ability to use one material – our new PES – for both photolithography and imprint will be very attractive to manufacturers,” Lu said. “At its core, our project is basic research, but it also has important industry implications. It’s very exciting.”

PES cures, or dries and hardens, at 165 degrees Celsius, about 35 percent cooler than the other two materials. The need for less heat should translate directly into lower overhead costs for manufacturers, Lu said. Another advantage of PES is its low water uptake rate of less than 0.2 percent, less than the other materials. Additionally, PES adheres well to copper and can easily be made less brittle if needed. All of these attributes make PES a promising candidate for redistribution layer application and UV imprint lithography.

“The results demonstrate that PES is feasible to be used as UV-curable resist for both the redistribution application for electronic packaging and micro/nano imprint lithography,” said Rensselaer Research Associate Pei-I Wang, co-author of the paper.

Along with photolithography and on-chip nanoimprinting lithography, PES holds the potential for applications in other optical devices, flat-panel display, biotechnology devices, and microelectromechanical systems, Wang said.

The project was funded through the New York State Foundation for Science, Technology and Innovation.

Lu’s research was conducted as part of Rensselaer’s Center for Integrated Electronics. The center’s multidisciplinary team of more than 50 faculty researchers and 100 graduate students aims to advance the role of electronic devices of our everyday lives by accelerating the production of the next generation of micro- and nanoelectronic devices and systems. The Center's mission is to build integrated top-down and bottom-up nanostructures, devices, and systems for information, biological, and broadband communication applications. Major activities include pioneering research into gigascale interconnects, 3-D interconnect structures, materials properties and process modeling, wideband gap semiconductors and devices, terahertz devices and imaging systems, power electronic devices and systems, and biochips.

For more information on the new PES materials, visit: http://www.polyset.com. 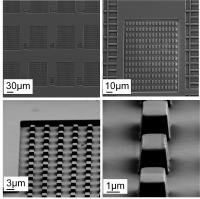